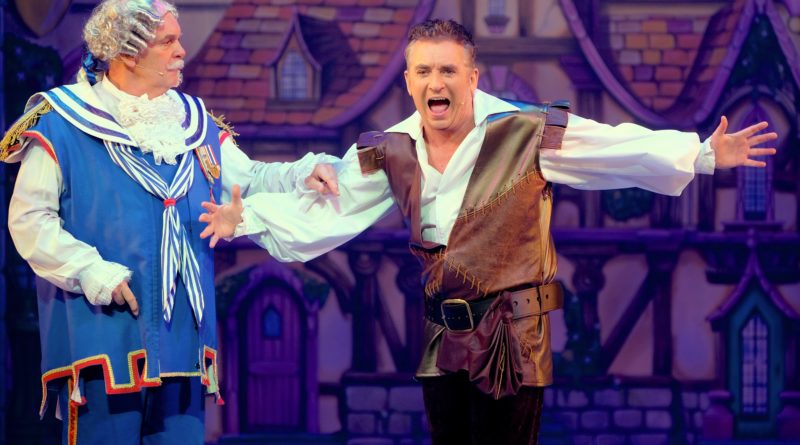 Ooh, that Bristol Hippodrome doesn’t half like its sparkle at Christmas time!

This year, QDOS Entertainment Group take over the stage with Dick Whittington, the rags to riches story of a lad who beat off the rats with his trusty cat to become London’s Lord Mayor, a fictionalised tale of a real man, and a story that spans centuries of English folklore.

Our Dick is the much-loved actor Shane Richie, someone who has been in the business for 40 years and has notched up more theatre performances and telly appearances than EastEnders’ Alfie Moon and Cat Slater have had break-ups, and it’s that loveable rogue Alfie who sticks in the public imagination. Richie brings Dick (what a great name for innuendo and, boy, doesn’t Richie get the gags in by the bucketload, brilliantly too), that cheeky chappy edge that comes so naturally, flirting effortlessly with the ladies, flashing a ‘I know, you know’ grin. This is a pantomime that is rare in that it has no fool/idiot/jester character but we barely notice because Richie entwines funny man and hero so well. He is, simply, fabulous and everything panto could ask for. His rapport with the audience is among the best we’ve ever seen (and WE”VE seen Andy Ford – sorry, never gonna get over that one, Bristol Hipp); his chat with children brought onto stage at the end of the show had happy tears prickling my eyes, after already having actually cried with laughter at Richie’s ‘it’s all gone wrong but that’s panto’ madcap antics.

Jennie Dale is a mean Queen Rat, who wants to take the capital city and will do anything in her power to stop our Dick, and she is balanced well by the fairy-like Spirit of the Bow Belles, played by Shona White, a wise woman who reminds Dick of his mayoral destiny. Peter Piper stands out as a fun Captain Cockles and you can tell that he and Shane Richie have worked together before because their chemistry is magnetic. This year’s essential drag is David O’Reilly, who struts about in outlandish costumes in his role of Sarah the Cook, mother of Christine Tucker’s sweet Alice Fitzwarren, Dick Whittington’s object of affection.

There are some really funny moments. One family favourite was the Sushi/Shoeshine tongue-twister relay between Dick, Capitan Cockles and Sarah the Cook – fabulously executed; they’re clearly having a great time up there. In another set-piece, the three are joined by Alice, when they do a special rendition of ‘The Twelve Days of Christmas’ and, predictably, mayhem ensues.

Panto should be camp, right? The Ensemble and The Ship’s Crew, played by The Acromaniacs, got that particular memo and their rendition of ‘In the Navy’ actually manages to outcamp even The Village People. When they prance about in sparkly blue and white sailor gear to this little beauty, my Mum and I audibly squeal in delight. The Ensemble are right up there with the best and brighten up an already magical and kaleidoscopic stage. Jumping and spinning and twirling and hand-on-hipping. QDOS has involved local children from the Bristol School of Dancing, who dance alongside The Ensemble, complimenting them in every way. The Acromaniacs do their own slapstick routine on the trampette, box and crash mat in what my Dad said was his favourite part of a pantomime that he reckons is the best yet (we’ve been coming to the Hipp panto every year for the past eight or nine years so that’s quite a claim). While we’re on the subject of dancing and agility, Blair Cameron is Kitty Cat, Dick’s right hand … erm … Cat and he gracefully slinks, frolics and finally beats those pesky rats, Aaron Renfree’s Choreography and Bret Yount’s Fight Director blending seamlessly.

One of the reasons that my Dad loved the show so much is the amount of music in it. From Elton John’s ‘I’m Still Standing’ (and with as much bling as Elton’s video, surely the blingiest video ever made) to songs I didn’t recognise, there seems to be constant gleeful singing, with music by the Bristol Hippodrome Orchestra. And colour, you have never seen so much colour! It looks as though a rainbow has puked on stage. Mike Coltman’s Speciality Costumes could make even Priscilla Queen of the Desert appear beige. The Bristol Hipp’s Dick Whittington really is the perfect antidote to the General Election, Brexit and the ideological civil war that this country is in the midst of.

All that and I haven’t even mentioned The Twins FX’s visual special effects yet. Blazing Christmas puddings!! Who needs 3D when these guys give us the real thing? The Master, a grotesque giant rat that hovers over the heads of those in the stalls, is so big and so imposingly close that he looks as though could gobble up whole children in the front few rows. Dick, you must stop him or we’re all doomed. And what about that flying London bus?! Mad.

This isn’t the wet-your-pants hilarious of Joe Pasquale (Aladdin, 2017) but it’s sharp and bright and rich and glitzy and fresh and joyful. The Bristol Hippodrome has struck multi-coloured gold this Christmas and this pantomime is just what the over-worked NHS doctor ordered. Listen to my Dad.

Dick Whittington shows at The Bristol Hippodrome until 5th January 2020

Image by Dave Betts Photography, with thanks 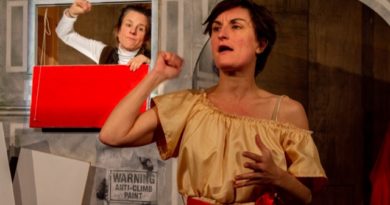 The Tinderbox at Bristol Old Vic