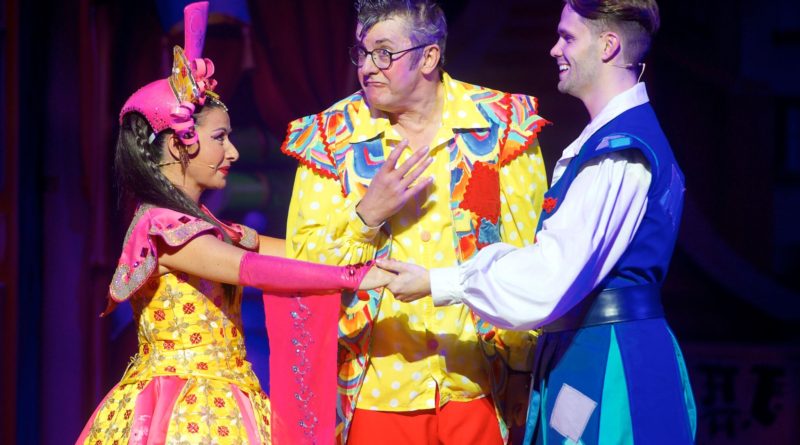 “Aladdin: Everything you could wish for in a panto,” boasts the glossy programme cover of this year’s British cheese-fest at the Bristol Hippodrome.

The warmth and vibrant colours inside the auditorium, contrasting fully with the ice-rain hooley that was just whipping us outside, wrap everyone up in full-blown Christmas. We’re thankful. Excited audience chatter is immediately replaced by their screams as the show starts with the first bang of the evening in what will be a pantomime with huge sound, pyrotechnics, thrilling visuals, a whole lot of laughs and, erm, a well-known gorilla.

Aladdin is a firm panto favourite that ticks all the boxes: a love story between Princess Jasmine and the poor boy Aladdin; that menacing baddy, Abaznazar, the best known on-stage dame in Widow Twankey and the perfect fool in her other son, Wishee-Washee. Add to that a secret cave, a magical genie and a flying carpet and … open sesame! A winning formula. One that, this Christmas, Qdos Entertainment has got so right.

We’ve seen every panto at the Bristol Hippodrome for the past nine years so we’re something of die-hards – my mum, dad and daughter (now 11 years old) and me. You’d think we’d be jaded by now, worn out with relentless innuendo and sparkle, wouldn’t you? But not at all and this year’s offering is up there with the best of them, running a smooth course, apart from when it all goes wrong, of course.

Undoubted Star of the Show Joe Pasquale must be the funniest man to play Wishee Washee. Anywhere. Ever. He never lets up and, not content with having the audience in convulsions, he goads and teases his fellow actors until they can’t bear it – a love scene between Aladdin and Jasmine becomes a howling comedy sketch thanks to Wishee. The tears of laughter are racing down my cheeks as Pasquale teams up with Marti Pellow as Abanazar and David Robbins as Widow Twankey in a delight of tongue twisting fun that shows the dexterity of all on stage. Real belly laughs – you have been warned.

Pellow is a laid back, self-possessed Abanazar, slinking around, confident in his debonair role, reeking of vanity. He reminds me ever so slightly of Gene Wilder’s Willy Wonker, all nonchalance and surety (but with a better voice). No teeth baring and claw wielding here – his menace comes from his confidence that he will win. He doesn’t, obviously.

Impressively, Robbins makes all of his own fabulous Panto Dame costumes, each one more outlandish than the last, as is tradition. Robbins is less camp than we’re used to in this role, gelling with the rest of the cast rather than standing apart from it garishly, as is often the case. His voice is strong and his experience obvious – note the scene when, alongside Pasquale, Alexis Gerred (Aladdin) and Rebecca Bernice-Amissah (The Empress of China), he gives us a dizzying rendition of that old slapstick favourite. “If I Were not Upon the Stage.” Hilarious and very, very well done.

Gerred’s Aladdin and Hayley Tamaddon’s Princess Jasmine display personality and togetherness, both demonstrating good voices and an appreciation of humour. And who’d have thought that The mean old Empress of China would be such a game-for-a laugh? Like the rest of her team-mates, Bernice-Amissah seems to be having a whale of a time up there. Kimberley Blake as a commanding Scheherazade (Slave of the Ring), completes the cast, not forgetting the Ensemble who, under the guidance of Director and Choreographer Jonny Bowles, add glitz, dance and a little bizarreness (penguins?) whenever it’s needed. Ooh, and surely we Hipp panto goers recognise the voice of the Genie?

But this is so much more than a few actors messing about, however professionally. Ian Westbook 3D Creations and The Twins FX Visual Special Effects are hard to beat. We not only see Wishee and Aladdin swirl around the stage on a magic carpet that actually appears to fly but, after the interval, we’re invited to wear the glasses supplied and whizz from China to Egypt ourselves, all manner of scary creatures jumping into our eyes. Shrieks abound all over the Hippodrome! Howard Hudson’s lighting is immense (“We’ll all be blind by the end of the show,” says my daughter) and expect boom after boom after boom from Russell Godwin’s fierce sound.

All in all, Aladdin is a visual and sonic assault that will make your face ache. Guaranteed.

Aladdin show at the Bristol Hippodrome until 7th January 2018

Image by Alison Cobb, with thanks 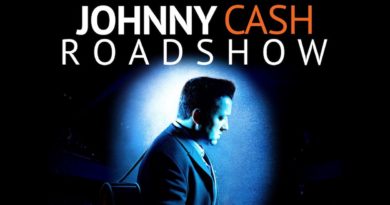