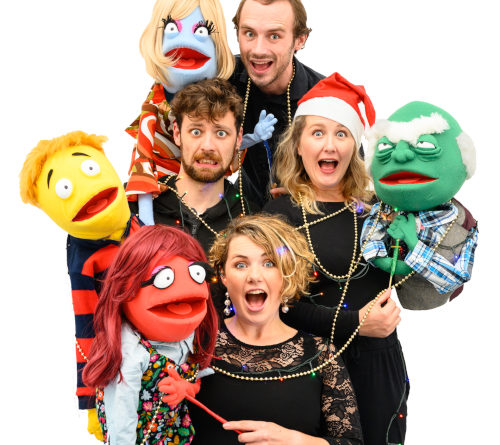 Up at Bristol Improv Theatre in St Paul’s Road, mulled cider is served at the bar, where, next to the sparkly Christmas tree, an upright piano carries the sign ‘see you in the second half’.

For the first half of How the BIT Stole Christmas, we take our seats in the theatre proper. On the stage, around 20 colourful puppets sit upright, mannequins’ arms and legs up their arses, acting as stands. Our cast of four bounce onto stage and ask the audience members for their Christmas stories; one happy Christmas and one awful Christmas. As this is improv, these two stories will form the basis of the next hour, no script, no way of knowing where it will go. Tonight, we have, ‘Last Christmas, I didn’t die from thyroid cancer’ (erm, this is the happy one) and ‘When I was five years old, all my Xmas stocking contained was one orange!’ Very sad, almost unbearable.

Stephen Clements, Lucy Fennell, John Gallagher and Imogen Palmer weave a bizarre tale (isn’t it ever the way with improv?) using many of those puppets as characters, in a fast paced and, one imagines, pretty exhausting show. We have a sister with cancer, an overworked junior doctor, an evil senior doctor, singing dads with 120 lads and the fabulous Mr Funky, Amazon Delivery Guy cum patient. This is the tale of an underfunded, understaffed NHS with tits and arse and an impressive amount of Chelsea FC past and present team member name drops. It’s daft and the audience loves it. The cast has a rapport that is strong and can surely only grow over the few shows they are performing together this December. Half of it is stuff and nonsense but we don’t care and, actually, they do keep the threads going and even manage to squeeze that lonely orange in.

And then to Part Two. We head back to the bar, grab a songbook and a Bristol Factory beer each and chill out to Ian Towers’ Christmas Singalong, who is sat at the aforementioned old Joanna, belting out anything from ‘We Three Kings’ to ‘Mary’s Boy Child’ to ‘Let it Snow!’ Some people join in and, bearing in mind that its only early December, that’s quite impressive. I can envisage the atmosphere in a couple of weeks’ time – the closer we get to Christmas, the more in the spirit folk will be and I reckon that the weekend of 20/21st, in particular, will be an absolute blast at BIT.

Mark, who sits by my side for the whole of this almost sold out show, detests improv and I had to convince him to try to leave himself at the door and just chill into it.  So, it’s testament to the cast and the venue that he had an enjoyable night, ‘nice place, nice people’ and would even consider going again. Wow!

Cool beans, BIT, we’ll be seeing you then 😉

Image by Lee Pullen, with thanks 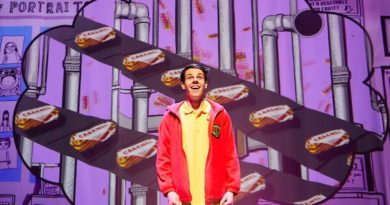 Tom Gates Live on Stage! at the Bristol Hippodrome 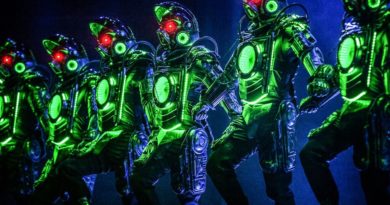 Lord of the Dance: Dangerous Games at Bristol Hippodrome