A Christmas Carol returns to Bristol Old Vic for its second year, with extra songs, a new cast and a story that is as entwined in British Christmastime as mince pies; it would be rare indeed to find a person who doesn’t know this tale of greed and redemption, of poverty and hope, a story that both scares and enraptures us, whether gleaned from Dickens’ original short 1843 masterpiece, Alistair Sims’ rendition of Ebenezer Scrooge in the 1951 classic film or The Muppets’ unrivalled puppet extravaganza. Or indeed any number of other versions of the story, played up and down the land every year.

In his adaptation, Bristol Old Vic’s Artistic Director, Tom Morris, has firmly stamped himself on this theatrical festive treat and anyone who has seen  BOV’s The Grinning Man or Swallows and Amazons, for which he was Director, may recognise his signature. Here, though, Morris has passed the directorial baton onto Lee Lyford and the pair have gifted us a socially aware production with wrappings of modern day references that sit side by side with the Victoriana we have come to expect. The question is raised as to how far we have actually progressed since Dickens’ day, as The Workhouse sits far too comfortably next to Food Banks, with poverty and social deprivation as rife now as it was then.

But the thing with Scrooge is that, although we are always aware of society’s ills, we are also given a reason to think the best of our fellow human and all that love and joy is well-placed and abundant here. More so. Tom Rogers’ design skilfully marries the bleak with the cheerful – a huge scaffold opens up this beautiful theatre to us, the austerity of the structure upstaged by Scrooge’s impressive four-poster bed, where he attempts to hide from his ghosts. And, as he starts to see the error of his ways, so we breathe from the drabness into a more colourful stage/world.

This production is very much about the music – before the show even starts, musicians roam the theatre’s stalls and circles, instruments in hand, chanting their macabre yet fun ‘We Are the Dead’ (death and rebirth is very much a central tenet here). Musical Director, Gwyneth Herbert, who also composed BOV’s The Snow Queen in 2016, has weaved her magic to bolster that playful sense of light and dark.

Herbert is also one of the best Ghosts of Christmas Present that you’re ever likely to be haunted by, resplendent in red suit with clownish fizzy blonde hair, friendly and cautionary at the same time. Mention should also be made of Ewan Black’s ghost of Jacob Marley, a Tim Burtonesque character that is both frightening and compelling, in no small way down to another over-the-top costume and, throughout, the costume design points delightfully to circus, carnival, decadence. Matt Hutchinson provides the puppets, wonderfully crafted and executed; his Want and Ignorance are nigh on terrifying (the recommended age is 7+). This production is a playful romp through humanity, with all its good and bad.

John Hopkins is an Ebenezer with booming voice, taking us from detestably (but always playfully) mean to damaged to repentant to downright cheery. Stephen Collins talks to us as Bob Cratchit and Mrs Fezziwig through sign language, or wavy language as Scrooge calls it, and the cast respond to him in an inclusivity that theatre in general could well do with more of. Rebecca Hayes is a wonderfully delicate Little Fan, while Mofetoluwa Akande plays a feisty Belle, Scrooge’s one love, a woman of strength and forgiveness.

There is some audience interaction too; a couple of children in the stalls take on the roles of a young Scrooge and Tiny Tim, whilst some of us help to decorate the theatre with vibrant colours at the end of the show, leaving all with a feeling that, if we pull together, we can get through the hard times, a sentiment that is so very welcome in the UK right now! 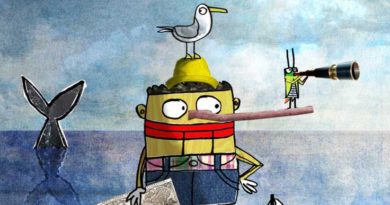