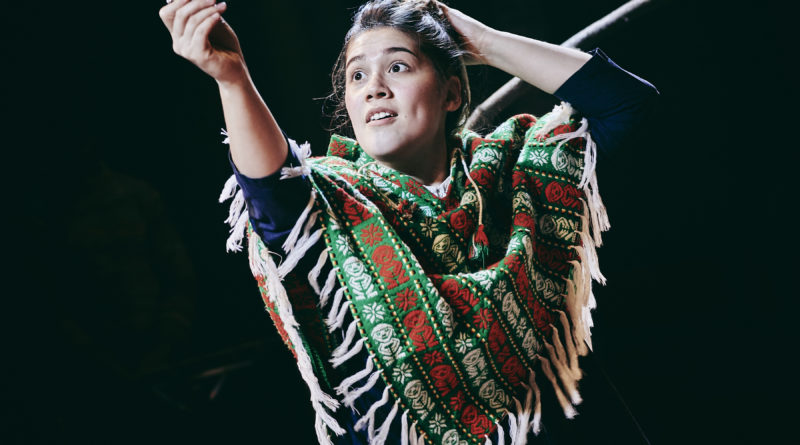 Snow White is hard show to review, because there are so many positives to judge it on. For example, the stage at the Tobacco Factory Theatre is beautiful, the snow effects are magical, the music is fabulous… I could go on. However, for every positive thing, there is something that doesn’t quite hit the mark for me. As well written as the script is, it seems to pull its punches at the last minute, making some of the satire feel a little toothless.

The first act sets the story well, but I wonder if Snow White, portrayed by a compelling Jodie Davey, needs to be amplified through the theatre’s speakers because her first couple of songs are very quiet compared to the backing music, which almost drowns her out. However, when we can hear her voice, she sings beautifully. What impressed me the most throughout the entire show is that every performer here is a multi-instrumentalist, each taking over musical duties while the other is centre stage. One of my absolute favourite performances of the evening was Stefanie Mueller, who is utterly adorable as Snow White’s wicked Stepmother. She’s everything that she needs to be to set the character in place, while never quite pushing over the boundary of what is redeemable within the context of the story.

The next stand out performance for me is Abayomi Oniyide as Jacob the game keeper, who is charged with carrying out the murder of Snow White. His voice is strong, rich and shows his versatility with his mixed styles of singing. This is a performer I would like to see more of and I would be intrigued to see him working in a more seriously dramatic or musical role because I imagine that he can reach great depths.

The musical accompaniment to the Queen’s mirror is ethereal bordering on spooky and splashed with enough occasional dark humour to keep the audience on the edge of their seats, even though we all know what’s coming. The final joke of act one involves the mirror voices and, despite being very silly, this is one of the funnier moments of the performance. Sadly, throughout the show some of the jokes that miss their targets are those with a more satirical bent, aimed at Brexit or Donald Trump. These really need to be more thoughtful or deeper cutting than they are because political satire works best when it bites and this is more like a gentle ribbing, so as not to offend anyone in the audience.

During the interval I sat with my friend and we discussed how the second half would play out. I postulated that the Queen would have to blame her desire for eternal youth and beauty on the patriarchy and the male libido. I also said that they needed to keep her redeemable, despite her ordering the brutal murder of her stepdaughter. Sure enough when the second half comes, the conclusion to her story arc is a weak joke stating that the Queen does indeed blame a patriarchal society for her need to be young and beautiful. Her distress at having to cope with a male dominated society driving her to order the murder of her stepdaughter is enough to bring her to tears and her stage make up carefully streaks down her face to make it obvious that she has been crying profusely. To me, this should be a much stronger statement about female equality and the gender gaps that are still present in our society. Given that other satirical jokes are made throughout the show, this could have greater impact and depth to it than it does. Snow White shows her depth of character by offering her Stepmother forgiveness, not an easy thing for her to do. Pointedly, the Queen is told that she needed to give Snow White time to forgive her, but the time it actually takes is mere seconds and the Queen is shown to be unsure about being hugged, which could lead to questions about her being a reformed character. I am aware that they need to hurry the story along but it did seem rushed, despite this being a moment that deserves greater understanding.

Going back to the interval for a moment, while my friend and I discussed the play, we were sat next to a mother and her very young daughter. The little girl was adorable and could not have been more than five years old. With her mother’s permission I asked the little girl if she was enjoying the show and she said that she was, but she was really looking forward to the second half and seeing Snow White’s beautiful dress and the seven dwarfs, all of which we aware of thanks to Disney. I truly hope that this little girl was not disappointed, although she did seem to enjoy what came next, even if it lacked dwarfs, pretty ball gowns or handsome princes.

The second half starts well enough with a change of set, creating a yurt from sticks and blankets and an almost hidden Snow White sound asleep under a blanket. The seven dwarfs turn out to be four vegan, anti-capitalist ecologically aware protesters who have a counting difficulty. Given the restricted cast, this is a great idea and the star of the second half has to be Alex Murdoch who leads the story some strange twists and turns. Again, the satire is present but at times it feels out of place or misguided and they return too often to the joke about how many of them there really are. One gag in particular that completely failed on me was a jab at the Extinction Rebellion movement, which I felt trivialised a serious and worthy protest. I am aware that this points to a degree of shallowness to the character, but it still feels somewhat out of place.

Overall, this is a show that is at times trying a little too hard by bring modern themes into a classic fairy tale. It almost works but for every hit, there’s a miss and the second half of the show seems to drag by. Given the excitement of panto or the wild antics of other Christmas shows I have seen so far this year, this one is good, but I am saddened to report that it is not brilliant. Every performer is excellent with some wonderful stand out moments in each half. But I am forced to wonder if this is a show that, at two hours long, is entirely suitable for a younger audience? Yet by making the show safe for all ages, some of the satire is less biting than it could be. Maybe, for the younger teenager, who is too old for panto but too young for the more vicious satirical pieces currently doing the circuit, this might well be perfect.

Snow White runs until 19th January at the Tobacco Factory and I am sure that, as they settle into the month, the cast will become sharper and more polished. 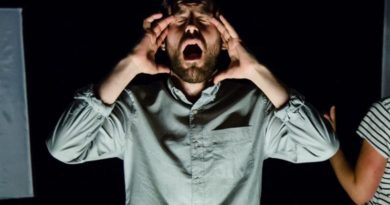