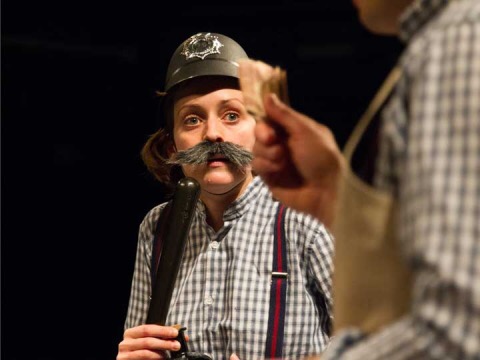 Last night I went to see Flintlock Theatre perform The Government Inspector at the Brewery Theatre.

This was an eccentric, wonderfully weird four person show with Klezmer music providing a fast, frantic soundtrack to the rapidly moving story. It’s a simple tale; a corrupt mayor and his dodgy accomplices become aware that a government inspector is coming to their district incognito, and that they are potentially in a lot of trouble. Their attempts to hide their tracks seem to be in trouble when they find that a mysterious official looking person has been in residence in the town for two weeks already. This leads them to welcome the stranger into the mayors home, where he is wined, dined and given numerous ‘loans’ of money. It is only after the stranger has become engaged to the mayors daughter, and driven off in the mayor’s car to get his uncles permission for the betrothal, that it becomes apparent that he was in fact just a young man who’d run out of money and couldn’t believe his luck.

Most of the actors played more than one role, and audience members provided an extra couple of characters (this really isn’t a show where introverts should sit at the front!). The changes between characters were slick, and I particularly liked Jeremy Barlow’s Charity Commisioner, a truly grotesque character who also elicited a moment of true sympathy with his pathetically sad exit after his trumpet was taken away. Sam Davies as the Mayor was wonderful, particularly his portrayal of frantic activity in just a few yards of what for want of better words I’d have to describe as a silly walk. Robin Colyer’s rich boy on the make was an arrogant twit, who did a beautifully collapsing drunken fall, and Francesca Binefa’s Bobchinksy was a joy, particular when he was bellowing at a poor audience member to ‘stop interrupting!’.

More than anything, what I loved about this show was the physical acting, from the exaggerated and wonderfully comic facial expressions to the truly skilled bad dancing. Overacted movement , ridiculous gaits and frantic gesturing combined with Robin Colyer’s text adapted from the Gogol play made for a really enjoyable, crazy, funny experience. I’d definitely recommend this for a real feel-good experience, as well as the lesson it carries about human stupidity and venality.

The Government Inspector is at the Brewery Theatre until 14 Feb. 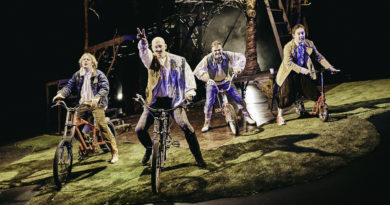 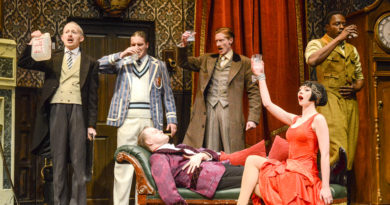