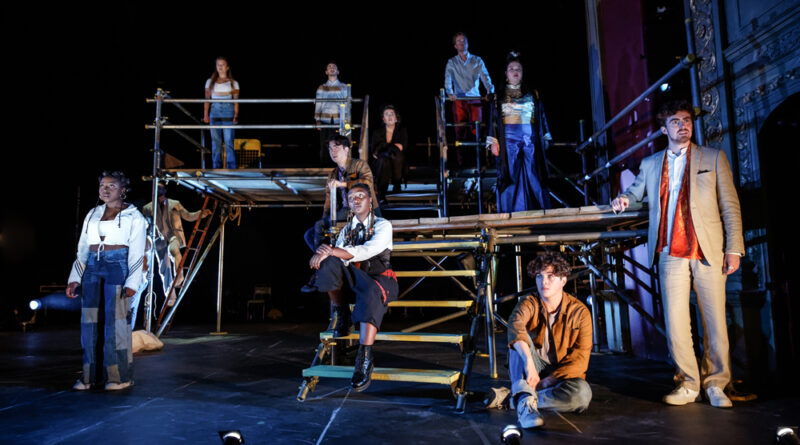 Over the past decade, one of the many advantages of being a theatre reviewer has been discovering things I thought weren’t for people like me (normal, everyday, not rich or posh, people), can actually be very enjoyable. Chekhov would definitely have come into the ‘not for me’ category, it’s proper highbrow theatre isn’t it? But when the invitation from Bristol Old Vic arrived in my inbox, two things made me say ‘yes please’.

First, I love seeing Bristol Old Vic Theatre School’s students on stage; they’re always incredibly talented, they have to be pretty good to even get a place on the course, and they’re following in some big footsteps – when you see one of their shows, it could be the next Pete Postlethwaite, Olivia Colman, Daniel Day-Lewis, Stephanie Cole or Jeremy Irons you’re watching. Second, I’ve yet to see a Sally Cookson-directed play I haven’t loved.

It was the right decision, because I thoroughly enjoyed The Three Seagulls.

I go in with no particular expectations, I don’t know the story, I certainly haven’t come across the three adaptations of it this version is based on (The Seagull by Christopher Hampton, Anya Reiss and Stupid Fucking Bird by Aaron Posner).

Over four acts, run straight through with no interval, we watch the story of a young playwright, overshadowed by his actress mother. Without giving too much away, there’s unrequited love, ambition, desire to change theatrical norms and traditions, jealousy, and so much disappointment. We’re told life is disappointing but The Three Seagulls is not, not for one minute, it’s funny, it’s sad, it’s tragic and it’s gripping from beginning to end.

It’s an energetic performance, with the cast moving up, down and around scaffolding – if they weren’t fit before rehearsals started, they are surely in the shape of their lives now – and I like the way the full depth of the stage is used, with the whole cast visible at all times. It’s not a musical but there are songs, and excellent lip-synching, and I love the choices they’ve made, particularly the version they use of Radiohead’s Creep, which is a favourite of mine. Several of the main characters are played by different people in different acts, and at times they’ll be on stage together, but it’s surprisingly easy to keep up with the changes, in part due to excellent costume design.

We learn what show business is about, for some it’s to be seen, for others it’s the applause (cue a Lady Gaga finale), and we discover that endurance is key. God knows this cohort have had to endure a lot, with much of their work having to move online and when they were finally able to rehearse in person, those rehearsals being hit by Covid infections and self-isolation, but you wouldn’t know that from the performance they deliver – they’re fab.

It would be unfair to pick out individual performances, so I’m going to name check them all, but a good performance isn’t just about the people on stage, there are a multitude of people in the creative, production and technical teams who all help to make it happen, so please also check out their credits HERE.

The Three Seagulls is performed by:

For further information, and to book tickets, visit bristololdvic.org.uk 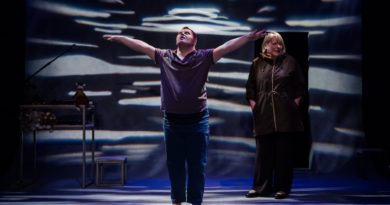 Living Spit’s A Christmas Carol at The Brewery Theatre