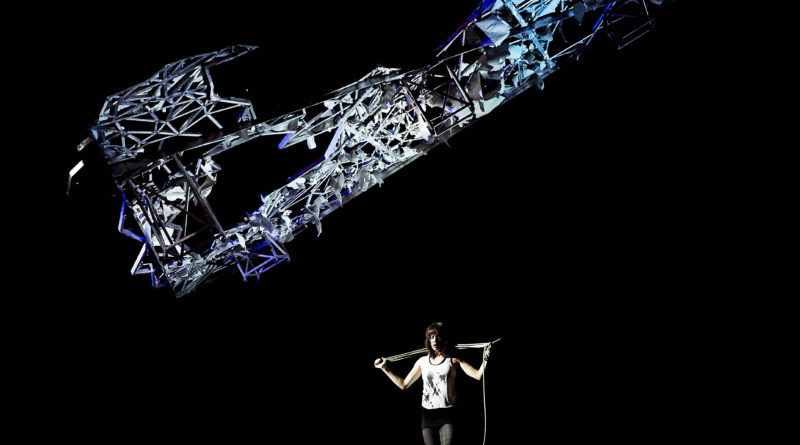 I was pretty sure I wasn’t going to enjoy the dramatisation of climber Joe Simpson’s Touching the Void, a book I read when it was first released and a film I actually bought on DVD (a rare event).

As a kid I climbed out of a Manchester estate on crags in the Peak District so my heroes were Don Whillans, Doug Belshaw, and particularly Joe Simpson, early members of the ‘Rock and Ice’, telling pioneering stories of climbing on Sash Cord with drilled out nuts. I later read all Simpson’s books, never with the same enthusiasm, I was never an alpinist, but there was no way I was going to miss this stage adaptation by Director Tom Morris, even if I doubted he would be able to pull it off.

Has he? Well mostly; Simpson’s sister, sarah, plays a prominent part early in the telling, a theatrical device that can be excused due to the need to explain the who, what, why, where, and how, but it jars though somehow.

If you don’t know the story already I’m not going to spoil it here, but it centres around the two climbers; Simpson & Yates, and Richard a gap-year traveller they met in Peru while planning a major alpine style ascent of Siula Grande. Early pub and cafe scenes, where some of the dialogue seems a little cliched, give way to breathtaking action on the rock , snow, and ice as the drama unfolds.

It’s not a climbers’ show, you are not going to get loads of unnecessary technical detail (did Yates really use his ice tools like that?) more it’s a story of mental and physical struggle, and human endurance. There’s all that in spades but there is humour too, the humour of people who are living and dying on the edge, lightness is added by Patrick McNamee’s playful Richard.

I thought this was an impossible task, seems Tom Morris agreed, but they’ve more or less done it, the mountain and crevasse scenes are very very good, very physical, and quite right too, great credit to Edward Hayter (Simon) and Josh Williams (Joe).

I may just reread the book, and listen to that Desert Island Discs episode.

Simon and Garfunkel: Through the Years at The Playhouse, Weston