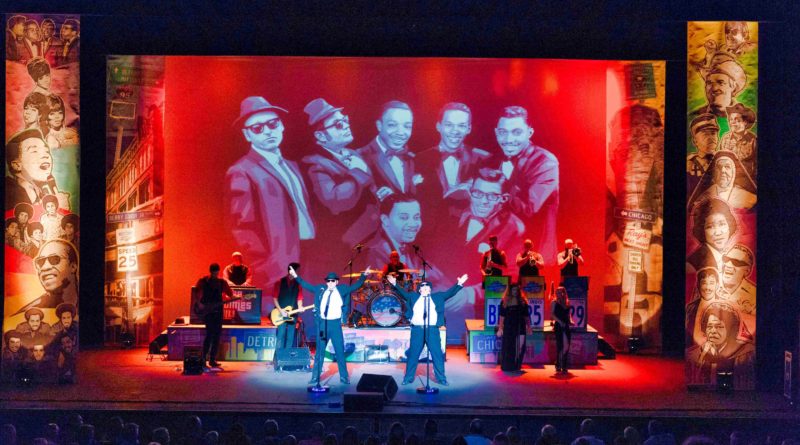 Best to start this review with a simple confession … until 21st September, I was technically a Blues Brothers virgin!

Yes, I know it’s hard to believe, but although I had obviously heard of the Blues Brothers, somehow the cult films had passed me by on my slow descent into sedate age. Boy, has that changed with knobs on, as the frenetic, fun filled, firebrand of a show I attended last week has the characters of Jake and Elwood firmly embedded into my mental musical database, and I have been humming ‘Ghostriders in the Sky’ ever since!

The Playhouse was packed with expectant fans, predominantly in the 40-70 years old age group, and the buzz was there from the very beginning, as this was an audience who were braced for the high octane performance that was to come, and many were decked out in the trademark black suits and white, long-sleeved button down shirts with skinny black ties, Raybans and Fedoras( or should that be Trilbys?)

With Chris Hindle reprising the character of Joliet Jake and Gareth Davey as Elwood, the show erupted into life with a lusty rendition of Soul Man, and from then on in it was up and running, with a joyous blend of Motown, Soul and Blues that reverberated through the enthusiastic audience and never seemed to draw breath for very long.

There was a great and suitable bawdy badinage between Jake, Elwood and their appreciative fans, and the Soul Sisters proved their musicality and impressive vocal power – Aretha Franklin would have been applauding in the aisles.

The first half of the show was great entertainment and merely required enthusiastic voices as a response, but upon their lusty return to the stage, it was obvious that this was now a party, and there was no chance of anyone in the auditorium wimping out!

The impressive Blues Brother Band ramped everything up to full throttle, and by 9 pm, I was up and seriously “shaking my tail feathers, baby” … certainly not the prettiest of sights, but trust me, I was not alone, as everybody was gyrating with huge enthusiasm and re-living their mis-spent youth, dodgy knees and hips being no insurmountable barrier just for a brief while.

All in all, a glorious riot of a show…thanks for the great time, Blues Brothers!

The Chicago Blues Brothers is currently on tour

To see what else is coming up at the Playhouse, Weston, see their website