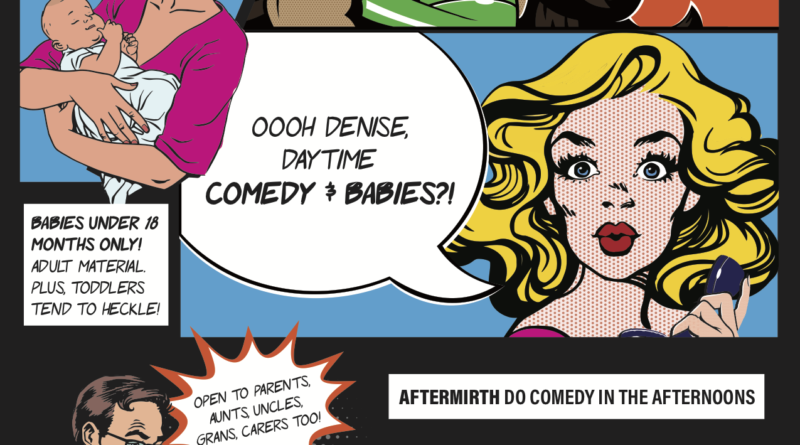 It’s an unusual sight to see so many babes in arms in the 1766 Bar and Kitchen at the Bristol Old Vic. But here they collect, as the person cradling them has a coffee and a natter before Angie Belcher’s brand new daytime comedy club for parents, Aftermirth. This clever invention is especially for adults of those little humans who can’t yet speak and are therefore unable to be influenced or offended by any bad language that may spout from the mouths of our funny MC and her three guest comedians at the Weston Studio.

Angie warms us up with keen observations about Bristol mums and baby names before introducing the first comedian, Louis Burgess, an act who talks about relationships, the pitfalls of online dating and life through a parody of well known pop songs.  His Devon Rap is particularly funny, though he seems a little bemused by all the babies, who of course, are free to squeal, feed and cry at their pleasure. Louise Leigh has a shorter turn in front of the mic but it’s a good one and she’s very at ease here, talking about parenthood and interjecting an unlikely 80’s number into her performance.

The interval is followed by the headline act, Julie Jepson, and she is well deserving of the title. This is one funny woman who talks about her lesbianism and life in Brighton whilst being physically heckled by a toddler almost continuously wandering about onstage. It takes talent indeed to weave the child’s unplanned spotlight share into the show but Julie manages it brilliantly. Maybe stand up comedians are used to din in the form of chat amongst the audience during their club routines so the baby noises may have been easy (?) to zone out but it takes a truly agile and witty person to incorporate such a distraction into her repertoire, I imagine.

Aftermirth is an absolutely great way for parents and carers to get away from the tiredness and tedium for 90 minutes or so in the middle of the day and, actually, I think daytime comedy clubs should be the new norm. With or without babies.