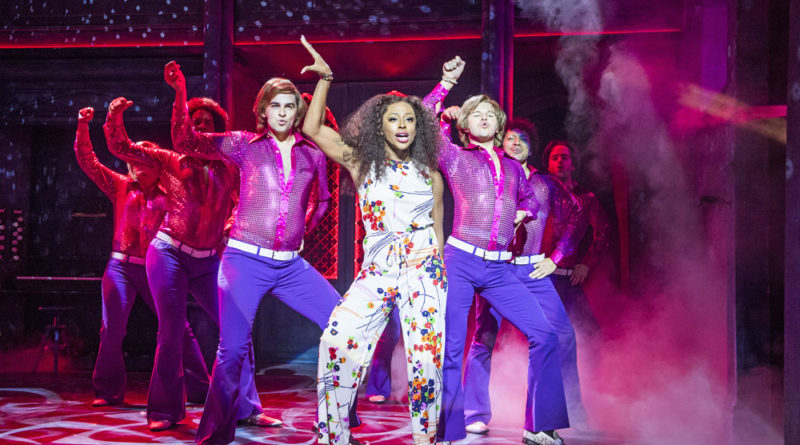 It’s less than a year since I watched Sister Act for the fifth time (this same production visited Bristol in September 2016). I worried then that perhaps it would be one viewing too many. Pfft, what a silly idea; I honestly don’t think I can see this show too often and I’d go again tonight if I could.

For those of you that are less familiar with the show… it’s set in late 1970s Philadelphia and tells the story of Deloris Van Cartier, a would-be nightclub singer and witness to a murder. Forced to hide in a convent until the trial date, she is something of a thorn in the Mother Superior’s side.

Deloris is given the task of knocking the convent choir into shape. It’s no small challenge but she quickly gets the cats’ chorus sounding more like a choir of angels and the pews begin to fill each Sunday. As the parishioners return to the church the restoration fund gets a boost and there’s soon enough in the pot to see off the bachelors with an interest in antiques who want to buy it.

She becomes a victim of her own success though, when her former lover, who she’s due to testify against, spots her on a news broadcast. She could hide from him, she’s offered sanctuary by Sweaty Eddie, the nervy cop who’s loved her since their school days. But she realises that her new ‘sisters’ mean more to her than anything and she’s not going to let them down as they prepare to perform at the most important mass of their lives.

Led by Alexandra Burke, the extremely talented cast more than do credit to Alan Menken’s fantastic soul-inspired score and Craig Revel Horwood’s choreography. They sing, they dance, they act, they have supreme comic timing, and the result is an energetic, uplifting show that I can’t imagine anybody not enjoying.

It’s on until Saturday and if you’re lucky enough to have tickets it could turn out to be your favourite musical too!