The Flying Lovers of Vitebsk returned to Bristol Old Vic bringing a fragile story of love and heartache set against the backdrop of the Russian revolution.

The last Kneehigh show I saw was Dead Dog in a Suitcase, which was the most epic and jaw dropping show I had seen for a long, long time. My expectations were set high. However The Flying Lovers of Vitebsk could have been produced by a completely different company, delivering the story with subtle touches.

Marc and Bella Chagall are played by Marc Antolin and Audrey Brisson and between them there is a noticeable chemistry which develops into a deep love. Marc transforms impressively into a number of characters bringing a shadowy humour to the stage, notably beating himself up as his own hands represent a number of characters that want him gone from Bella’s life.

There is a light touch with regard to props which is delightful, for example Bella’s pregnancy is represented by a simple balloon being blown up at the front of the stage and cradled until it bursts. A simple yet powerful set seemingly thrown together to create a haphazard angled platform, suggests how precarious relationships can be.

Small and beautifully choregraphed mirrored movements between Marc and Audrey convey the depth of connection and love between the characters. These are kept minimal and I feel they hold more weight for that.

The attention to detail with colour both in costume, set and script is striking. Colours projected onto an angles’ projection screen changing to reflect and create the mood on the stage.

Bella’s line to Marc, ‘You have blue eyes and pink cheeks, you are the wrong colour to be a soldier’, is delivered with such gentleness and devotion that it sums up love in a difficult time for me. The fragility of art and self-expression juxtaposed against the steel brutality of political unrest is timely.

James Gow and Ian Ross give a depth and light to the performance with their uplifting original music.

See What’s On at the Old Vic on their website 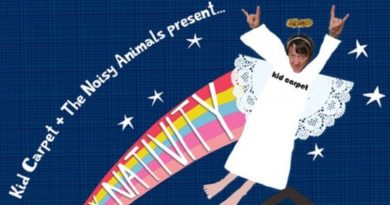