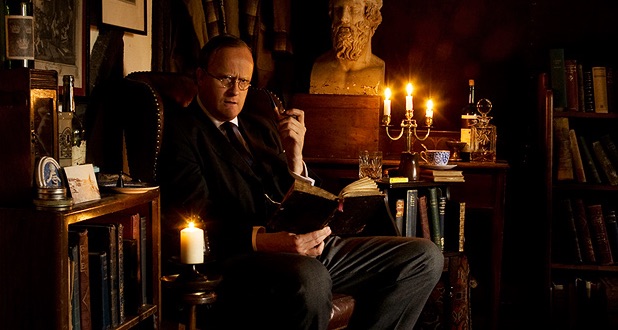 While I enjoy a good performance or story telling session, I don’t usually go out of my way to engage in the ghostly or horror genre. Memories of bed time ghost stories as a child are still a little too fresh – The Monkey’s Paw and other such delights.

So it was with some trepidation that I went to review Casting the Runes; two ghost stories by M R James. I read the title story in preparation before the show and was pleasantly surprised – it was as much thriller as chiller and very well written. James was a scholarly gentleman who, despite his inclination towards writing dark stories, had a sociable and contented nature.

The first (and title) story tells of rejection of a manuscript which is taken badly by the author, the unpleasant Mr Karswell. His intentions are malicious and indeed as it comes to the attention of the reviewer of the manuscript, this is a person not to be crossed.

Robert Lloyd Parry sets the tone well. An armchair and a candle take centre stage, setting off the Victorian feel with a crystal decanter. This one man show is appropriate for the material – the story could almost be a radio play. The audience are quiet and the lights dim.

Casting the Runes is well told, with the majority of the story recounted faithfully from James’ original (which is worth a read). As the story unfolds, we are swept along with the flow, hoping that Mr Karswell will not get the upper hand. The story telling is engaging and the tale ends with an abrupt conclusion. An interval breaks the two stories.

The second half, the tale of ‘The Residence at Whitminster’, has quite a different feel. Whether because the story was not known to me or just that it was darker, it feels more foreboding. I and others in the audience jump at one point when Parry shouts out aloud (prickling the hair on my skin!). Most of the story telling, however, is calmly told, much like Tales of the Unexpected for those who remember the 1980’s TV series.

Set in the Victorian era (author James’ era), this second tale does not end with such a definite conclusion. So we leave the theatre with some unanswered questions (at least myself and my companion did) which seems strangely appropriate for a ghost storytelling session . . something lingers on and there still more to be known.

Parry clearly enjoys the language used by the author and delights in the detail; between them they set a good scene. The show was scheduled to be a one off though due to popular demand, there’s been an extra afternoon performance.

There is something very satisfying about having a story relayed well and Robert Parry holds his audience captive. These ghostly tales were told with a good balance of humour in between the hair raising bits. I’m just glad I’ve some company walking home! 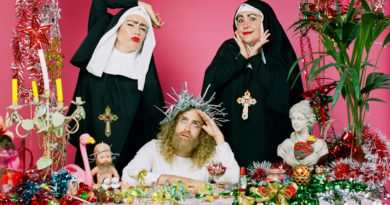