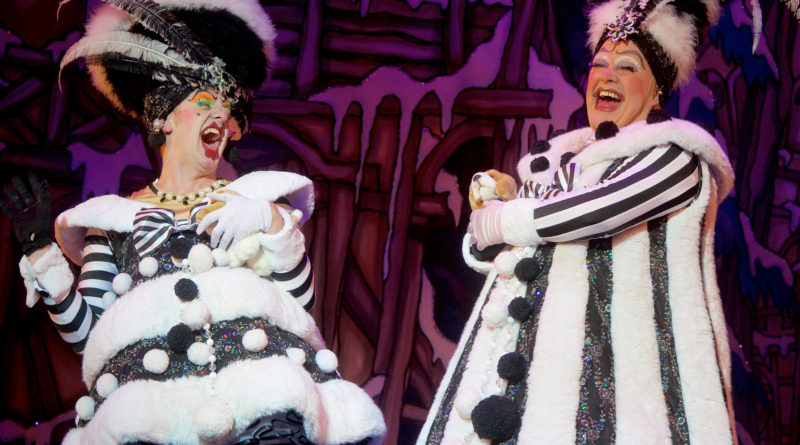 This year the Bristol Hippodrome is revisiting an old favourite. Actually, not that old: Eric Potts’ Cinderella was only here three years ago and even my 10 year old remembers parts of that set recycled from 2013. But, a firm believer in getting the most out of everything, I approve and, anyway, just look at all that delicious Sparkle.

We were a little apprehensive because our brilliant fool Andy Ford has deserted us for the New Victoria Theatre in Woking after the best part of a decade – Man, in our family he’s become more representative of Christmas than St Nick himself and much more fun. So how were we going to cope at our first ever Bristol Hipp panto without the clever and crazy fella? The role of Buttons is filled by New Zealander (important, that) Jarred Christmas – so that’s a good start. From his swivel office chair entrance, we know that he’ll look after us, taking us by the hand into daft jokes and cheese, although his eloquence is unexpected, not being familiar with him or his telly persona in the slightest. He has a good relationship with words, delivering them with all the craft of an accomplished comedian. And Christmas’ banter with the Ugly Stepsisters is surely amongst the most professional pantomime on record. Inexplicably named Wasabi and Saffron, the Ugly Stepsisters have the upper hand in extravagant costumes, as they should. Along with our Kiwi Buttons, Tim Hudson (Wasabi) and Charles Brunton (Saffron) provide the panto staples – the “behind yous” and the “Oh, no it isn’ts!” – as well as the lesser-known word-game-in-a-chocolate-box brilliance. Very funny! When asked, my daughter said that Wasabi was her favourite character of the night, the first year that the Princess role hasn’t won that particular accolade.

Rhiannon Chesterman’s Cinderella, though, is refreshingly strong. No sickly sweetness here, almost defying her more naughty than nasty sisters with a steely look that says, “Bring it on. You know I’m the winner.” And who wouldn’t be when you’ve got ice-skating legends Torvill and Dean (on roller blades) as your Fairy Godparents? They bring an element of class to the this pantomime, whooshing on and off stage to sprinkle magic whenever it is required. Christopher Dean is something of a comic revelation, having some of the best one-liners and determined to fit in with the Brizzle crowds with his ‘Gert Lush’, ‘Babba’ and ‘Cheers Drive!’ Constantly, he tries to break into the beyond-famous Bolero routine that made this pair national sweethearts back in 1984 but is berated by Jayne Torvill until the end of the show, when they duly bring the house down with a version of it that brought tears to the eyes of many audience members over the age of 40.

Back in 2013, Louie Spence spoiled us all with the funniest performance I am ever likely to see in panto with his wickedly camp Dandini. This year that role was filled with panache by the excellent Samuel Holmes. With just enough lip-licking, eye twinkling and suggestive eyebrow raising to put him right up there with Charles Hawtrey and Julien Clary, Holmes get my nod of the night.

Backed up by the solid experience of Anthony Houghton as Baron Hardup (also Director; hats off, Sir!), Blair Gibson’s jolly Prince Charming, a troupe of beautifully clad and well choreographed Villagers, the well-in-step children of Bristol School of Performing Arts and Bristol School of Dancing, a lot of pop songs I’d never heard of, extraordinarily good sound and lighting and a very pretty set, this is a slicker panto than we’re used to. OK, I didn’t laugh out loud once but I had a grin on my face the whole way through. My parents loved it. My daughter did too.

Just one thing, though, Family First Entertainments – for the sake of inclusivity, please evaluate your casting so that more of Bristol’s vibrant multi-cultural community is represented. Because every child deserves to know that s/he too could be on stage.

One thought on “Cinderella at Bristol Hippodrome”