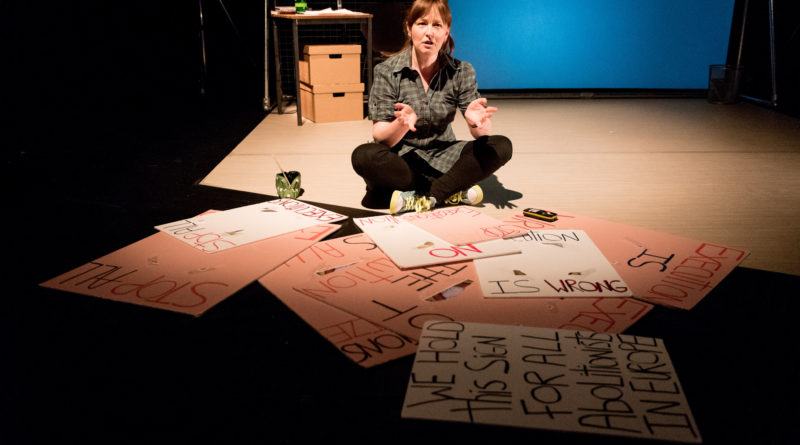 “I hope we don’t get done for anti-social behaviour,” I say, pint in hand, as we’re led en masse from the Tobacco Factory Theatre bar along North Street to The Brewery by one of the theatre staff. We hadn’t imagined that The Road to Huntsville would be performed anywhere than the TFT auditorium proper but, of course, Othello is still running there and, anyway, it’s a thrill to be back across the road behind Mark’s Bread because I’ve witnessed some of my favourite performances of recent years here. Monologues, many of them. Mostly by women. That’s my over-riding memory of the now closed-down Brewery Theatre. Tonight, we’re round the back in the small rehearsal space still reserved for TFT. Three rows of chairs. An intimate audience.

And what’s this? A large screen, minimal furniture and a one-woman show? Ooh, this is flashback-inducing then. Stephanie Ridings has written and performs a frank and very well researched hour-long treatise into the men on US death row and the British women who fall in love with them. Some of our own even marry men who are condemned to ‘state-sanctioned homicide’, knowing that his time on this planet is limited, aware that she will never be able to touch him, kiss him. Intelligent, professional, family women. Some of these men are serial killers, rapists, murderers of wives and girlfriends. How? How does love like this happen? In a bid to answer exactly that question, Stephanie sets off on her own journey of self-discovery.

There’s no substitute for experience, is there? it’s one thing to read books and to watch documentaries on this fascinating subject or to browse websites especially for women who wish to become pen-pals with those awaiting execution. It’s another to befriend a man thousands of miles away, who has been locked up for 23 hours a day in a tiny room in that huge US State of Florida for 14 years, as his hour of eternal punishment creeps ever closer. Primary research is to stand in solidarity with anti-death penalty protestors outside the high walls of the Huntsville Unit, the place of execution.

Stephanie Ridings manner is relaxed, chatty, winning. And she is heart-warmingly sincere. Interspersing her speech with video, images, texts and voices, she keeps us listening throughout, wondering how the story will unfold, willing her to stay (emotionally) safe in her research into this important issue that is so often overlooked. Is the taking of a life, any life, ever justified? Because the state decrees it, does that make execution OK? Or are we so sheltered from the realities of it in a country that doesn’t exercise capital punishment? What about the families of these men?

There are plenty such questions still swimming around in my brain after witnessing The Road to Huntsville. I have, so far, restrained myself from browsing the websites where women go to befriend men on death row because I don’t want to get sucked in. After all, anyone could. Or maybe we should? After all, what else do these men have? But, no. I couldn’t resist, however, taking a look at ‘Texas Department of Criminal Justice: Offenders on Death Row.” This is not a film, this is not a romantic read – much of the ‘Offender Information’ I have clicked on gives details on men who have killed women and/or children (some have been sitting wondering when they are going to die since the late 1980s/early 1990s). No worries, I couldn’t possibly befriend such a Monster. Could I?

This is a necessary piece of theatre that is at once entertaining and provocative. Go and see it but don’t blame me if you start googling some stuff you’d hardly even contemplated before.

Image by Graeme Braidwood, with thanks