ONE of the most iconic seaside attractions in the South West is celebrating its fifth birthday since reopening to the world.

The Grand Pier, in Weston-super-Mare, attracted worldwide attention in 2008 after burning to ashes in a devastating fire.

It was the second blaze in the Victorian structures lifetime, after a previous fire destroyed the original pier back in 1930.

Upon reopening in 1933, it housed a funfair, deemed the largest on any pier, and the attraction was Grade II* listed in 1974, as it was considered to be a monument of historic importance.

When history repeated itself in 2008, owner Kerry Michael pledged to restore the pier to its former glory and he reopened it in 2010.

The newly created modern Grand Pier was restored to its rightful place as a central icon in Weston, and now it celebrates its fifth birthday.

People who have enjoyed their wedding and birthdays on the pier have been especially invited to the birthday party on October 31, and everyone can attend the celebrations from 12noon-4pm.

To mark the five year milestone, all unlimited ride wristbands will be £5, five giant teddy bears will be given away, and all meals in Boardwalk restaurant will be £5.

There will be a huge birthday cake, dancers and special performances, free bouncy castle, free face painting, plus free sticker and balloon giveaways.

Children are also invited to design a Grand Pier birthday card, in order to win an educational visit for their school class.

A Halloween Birthday Bash will also be held from 8pm-1am, offering Ghost Train rides and music from the ‘Rolling Bones.

Grand Pier owner, Kerry Michael, said: “I can hardly believe it has been five-years since the momentous day we unveiled the newly built Grand Pier for the world to see.

“It gave us a great sense of pride being able to restore the icon of the town to be enjoyed for many generations to come.

“People have visited from all over the globe since we reopened, and we feel immensely proud to continue to draw increased levels of tourist to Weston-super-Mare year after year.

“We want to give something back to thank the community for their support and we will be holding a major 5th birthday celebration.” 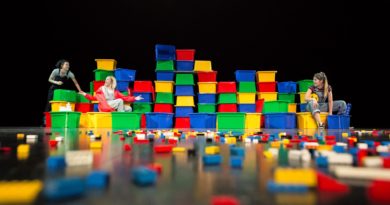