Jane Eyre takes such excellence to another realm.  This, maybe one of England’s best known love stories, has been deemed worthy of two parts by Director Sally Cookson.  The book isn’t exactly a tome, so why bother?  We saw Jane Eyre over two nights – in fact, we all but devoted our weekend to it; it has been noted that it takes a committed theatre goer to do this, especially if you don’t live in the city.  But, oh my, it was worth it!

10 actors and musicians own the stage that resembles a wooden playground, many of them adopting multiple roles with perfect versatility.   I read Jane Eyre for the first time when I was 30, without pressure from an English Literature exam but simply because I wanted to.  Parts of it made me sad, others angry and, at times, it allowed me to almost touch romance.  Our Old Vic weekend brought back these emotions in floods over and again, as I became excited knowing that Jane was about to meet Him for the first time, that, NO, that voice does not belong to Grace Poole and that Mason would bring the whole, flawed wedding party crashing down.

In the title role, Madeline Worrall plays a strong, wilful heroine, laden with grief, always questioning, ”unjust, unjust.”  I wanted to soothe her, to tell her it would be alright, thankful for my own life as a woman in 21st Century Britain.  I didn’t much care for her Mr Rochester, portrayed by Felix Hayes, but then I didn’t in the book, always feeling that Jane was ‘above’ him – so, yes, I must concede, almost grudgingly, that Hayes plays the bumbling, brooding Gent to very good effect indeed.

Cookson’s Jane Eyre is a story very well told and so easily digested.  But the high quality of the acting here makes it difficult to pin down anyone as outstanding except …

The music!   Centre left of the stage, just up there on the slope, stands a huddle of instruments and we are left unsure as to who is playing which, such is the fluidity of their masters.  Composer and Musical Director, Benji Bower, gives Jane Eyre a melancholic, intoxicating, comedic element that no words ever could.  And, as Bertha Mason, Melanie Marshall is the only character not dressed in appropriately muted Nineteenth Century attire; her red dress is as vibrant as her singing voice.  She’s always there, menacing, impossible to escape!   I have an almost urgent need to reread Jean Rhys’ Wide Sargasso Sea to once again familiarise myself with her, the first Mrs Rochester.    The only disappointment is that Marshall doesn’t scale Michael Vale’s tall wooden structure to scream madly from the rafters and throw herself from its heights.  But, then again, perhaps she doesn’t need to. Maybe that voice is enough.

Whenever Jane is off again, running away, or being sent there,  I want to climb into that unseen carriage with her and the rest of the cast, who also play her inner voice, her personal madness, just to jog/dance alongside them to the beat and the heart-pacing repetition of the voice(s) of the coach master.  The music of Jane Eyre is so powerful that, as soon as we got home, we gave ourselves a fix of those songwriters that Bower’s score either reminded us of – Mark Hollis, Terry Riley (by Bang on a Can), Brian Eno – or that which was more explicit – Dinah Washington, Gnarls Barkley and, then, more Benji Bower.

I might have to admit that, this time, I’m at a bit of a loss for words.  There is a danger that, on reviewing Jane Eyre, only a stream of superlatives will pour out.  It may be the best piece of theatre you’ll see this year!  Enough said? 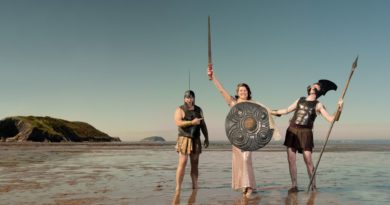 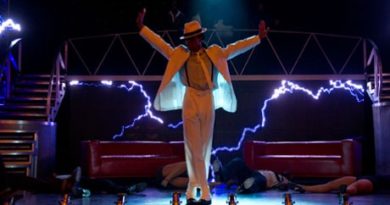 Thriller at The Bristol Hippodrome