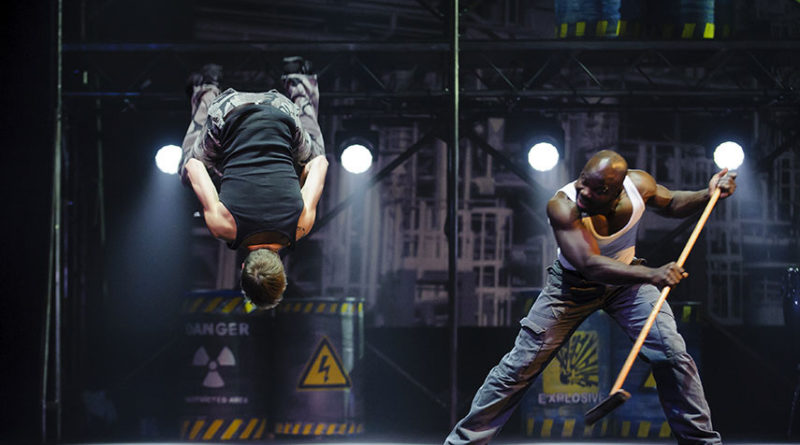 Tap Factory at the Playhouse on a wet Friday evening tried very hard to live up to its publicity, as the 8 male cast members delivered a frenetic and visually engaging series of dance sequences, carefully choreographed by Artistic Director Vincent Pausanias.

Staged in a two tier industrial workshop setting, the ‘storyline’ centred around interactions between the employees, and involved cameo comedy and dance performances, which sometimes fell a little flat. A Duelling Banjos sequence played out on either side of a ladder was brilliant but the running gag of workplace bullying made me feel really uncomfortable by the end of the evening, and was never properly reconciled.

The acrobatic interludes, however, were absolutely stunning, and the perfectly proportioned young athlete’s performance on the aerial straps had me holding my breath for far longer than is good for me at my age!

With body popping, break dancing, slapstick and copious amounts of foot stomping, the show was a huge hit with the younger members of the audience, but I found myself longing for a tune or two to add a bit of rhythmic content – Tap Factory with varying tempo would have a much more universal appeal, I suspect.

See what else is coming up at The Playhouse Weston here
Image by Margot de Heide, with thanks

A Girl is a Half-formed Thing at Tobacco Factory Theatres