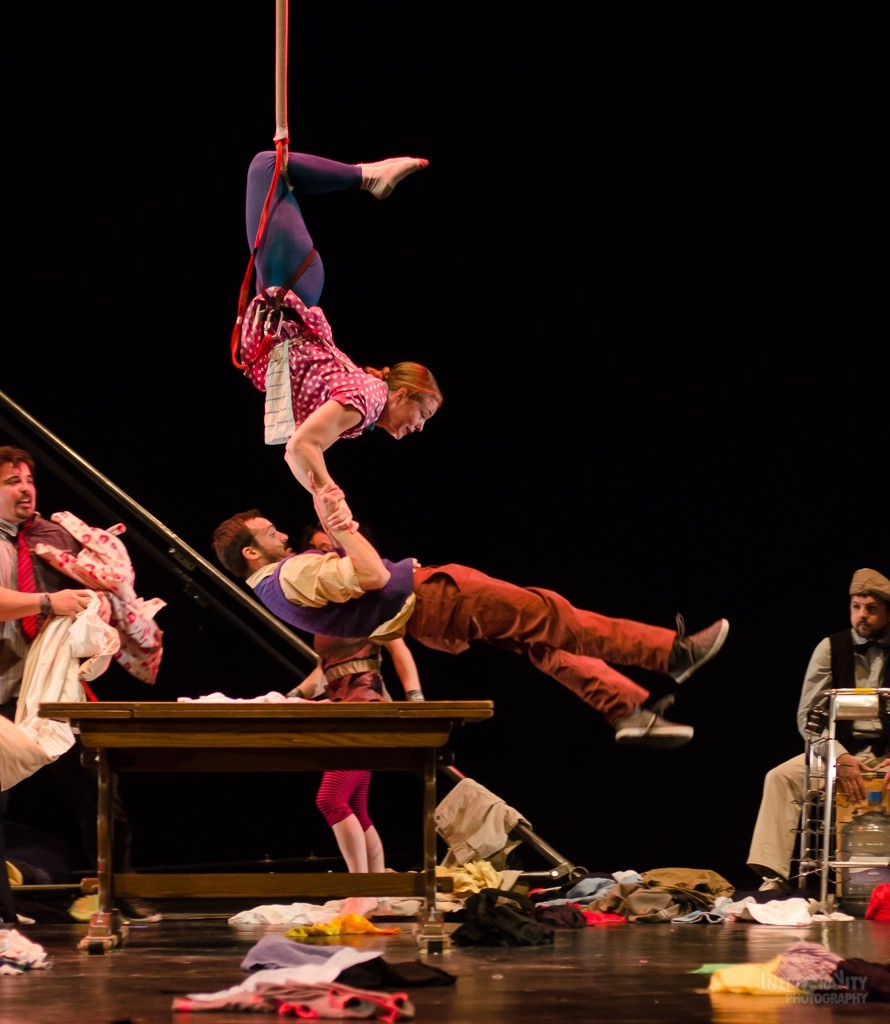 St Paul’s Church in Portland Square is home to Circomedia, Bristol’s circus school. At night, it is impressively illuminated; my 9 year old remarks on how the whole building constantly changes colour and we guess that next we’ll see orange … yellow … green … blue light up this Grade II listed ‘Wedding Cake Church.’

Inside, trapeze and other aerial equipment hangs from the ceiling and our seating is tiered like in any good theatre. This is our first time here and so we enjoy taking in the surroundings.

2015 is the 2nd outing for Circus City, Bristol’s Biennial Circus Festival, which showcases circus-inspired theatre across the city during the month of October. Unfortunately, The Hogwallops is the only show we’ve made it to and, seeing my daughter’s reaction to it, I soon understand my mistake.

The Hogwallops are a family of loons. Today is Dad’s birthday and he, the geriatric Pepino, demands a celebration in the form of a cake. And so, for the next hour, the other four rally around, trying to achieve just this. But this is circus, so everything is done with a bit of slap-dashery.

Flour is sprinkled liberally, doubling up as anti-slip powder for our aerial performers. Eggs become juggling balls. And that banana … well, that really is the prized ingredient. There are mishaps as laundry spews all over the stage and, at times, into the audience. There is unrequited love when one of the cast falls hopelessly head over heals with a member of the audience. And there is laughter, lots of laughter.

Think trapeze. Nay, think a zimmer frame trapeze if you can conjure up such an invention. Imagine acrobats and silliness; ‘Lost in Translation Circus’ delivers a whole lot of tomfoolery. The Hogwallops is set to an original score that at times transports you to a down-and-dirty Parisienne night-club or sees you attempting to tango in some Argentinian barrio. It throws you into the world of misjudged self-help guidance about love (which creates some very wacky, completely stupid dancing) or back to your bedroom reading a Roald Dahlesque tale.

Sometimes the moves ain’t that slick: “Was that supposed to happen, Mum?” on a few occasions. Maybe, maybe not. But it doesn’t much matter because this show includes more than a touch of pantomime and masses of clowning about. This is physical theatre and they can get away with almost anything.

Ultimately, this is a fun-packed and cringe-inducing family show that we both really enjoyed, especially the girl. We’d go again!

The Hogwallops shows at Circomedia until 29th October

Ghost the Musical at The Bristol Hippodrome