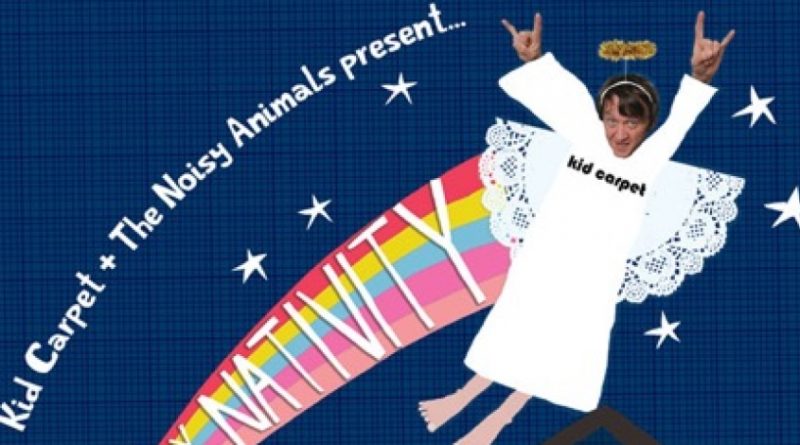 Kid Carpet has arrived in Weston-super-Mare with his Noisy Nativity at The Tropicana Theatre, and its a sell out. Yippee! I was lucky enough to get tickets to see the show with my seven and four year old daughters, both who saw it with me last year in Bristol and both who know the ‘Jesus is a Hedgehog’ song pretty much word for word. And it seems we were not the only ones who were not first timers. A couple of my friends children were loudly giggling from the other side of the auditorium before Kid Carpet (aka Ed Patrick) even said a word. The boy next to me rushed to the front of the stage as soon as the show began, his mum whispered to me that he had not stopped talking about how excited he was to see it again all week.

For those of you not familiar with the story of the the Noisy Nativity, then let me fill you in. Kid Carpet has been asked by Nutty Noah (the Mayor of Weston, you knew that, right?!) to put on the Nativity for the children of Weston. There is one condition though. He has to do it PROPERLY. No mucking about allowed. So, all the parents in the audience who have sat through this kind of thing will know exactly how it goes. Badly played recorders, tea towels on heads, a babydoll baby jesus, cute angels. Y’know? That sort of thing. Does Kid Carpet manage to stick to the script and do a proper version? Well, I don’t remember Mary and Jesus leaving Nazareth in a police van and I don’t think they stayed at a Travel Lodge. I don’t remember any flying to Bethlehem on golden eagles, and I’m fairly certain that David Bowie did not feature in the version I know of…

This show, and Kid Carpet’s style in general, is silly and anarchic and perhaps not to everyones taste. I was reminded today of how much who you see a show with can affect how you perceive it. When I saw the show in Bristol I was seated next to a Dad who seemed to share my kind of funny bone. We both giggled throughout the show, and we were ‘feeding off each others funny’ if you know what I mean. Our mirth was catching, and making me laugh even harder. I actually thought I was going to rupture something during the ‘Salt n Pepa’ song when he snorted audibly, and this only made us both laugh harder. Today I was seated near someone who obviously did not like the show. (Fair enough, we all have different senses of humour, and that is what makes the world go round. I grew up giggling uncontrollably at things like Vic Reeves and Bob Mortimer, who made me laugh hard and with abandon. My mum found them beyond unfunny, and it baffled her as to what I was laughing at.) Today, I did not have my laughter buddy and I just did not laugh as hard. It is worth noting here though that the show fell over a little bit in places because of some of the sound and visuals. My favourite bit where the Star of David (Bowie) descends from the heavens fell a little flat as they couldn’t quite get the visuals right on the big screen. Some moments just didn’t quite seem loud enough, and I guess you felt that it could have done with a teeny tiny bit more rehearsing to make it a little tighter. I understand it must be hard though, the show is on for such a short amount of time and it is the first time at the venue for Ed Patrick. My gut feeling is that the show will be much better tomorrow; they will have figured out where things were not quite right and had the time to sort it out.

That all aside though, one thing was blatantly clear. All the kids in the audience bloody loved it. The show really was anarchic and kind of felt like it might fall over at any second, but I think the kids really appreciated the fact that they were so included. When a show is utterly and completely polished, I’ve seen my kids be a little bored. Ed has a natural way with the small people, making his ability to engage with them seem utterly effortless. My girls were in the front row with friends, and I was a few rows back from them. At other shows I have taken my 4 year old too, she has mainly just sat on my lap. In this one she was joining in with the audience participation with abandon, and clearly loving it. I really wanted to have seen whether they were singing their lungs out to Jesus is a Hedgehog; I really hope they were. We sat in the Bay Cafe with our friends afterwards and there were six children ranging in ages from three to seven. Every last one of them was singing ‘Jungle Bums’ to each other endlessly, and exploding in laughter. My daughters both were singing the “Golden Eagle’ song to each other as we headed home along the seafront.

Thanks Kid Carpet, you are obviously doing something right and the kids LOVED you!

Stella and the Starshiners at The Wardrobe Theatre