I could tell this was going to be something a little out of the ordinary upon reading the title, which, let it be known, I had to research.

L’apres-midi d’un Foehn is a play words, taken from Claude Debussy’s Prelude a l’apres-midi d’une Faune, to which, among other Debussy compositions, this piece of theatre is set. The French composer’s work, in turn, was the inspiration behind Nijinsky’s ballet of the same name in 1912.  And now, here, in Crying Out Loud’s contemporary mime, the word Faune (faun) has been replaced by Foehn, which is a dry, warm Mediterranean wind.

So, this is still ballet but with a difference. It’s a ballet performed by Jean-Louis Ouvrard and a dozen or so plastic bags; the cheapest-looking, most disposable plastic bags that you are likely to find. The sort that you put your potatoes in and they fall out of the bottom to lollop and roll around on the lower deck of a London bus, while fellow passengers try to rescue them with you. No? Just me then?

We enter the Old Vic Studio Pit to find our human performer pacing a circle with solemnity, as if he’s sussing out the set up, looking at what’s available to him, wondering what he can do with the two pink, thin plastic bags and six electric fans available to him. We take our seats around the circle as he contemplates and, once we’re all also pondering his next move, he takes out a pair of scissors and some clear tape to display how these two bags can be fused to create a near diaphanous figure.

The lifeless bag-person is placed in the middle of the circle and the six fans switched on, one by one. Ouvrard retreats to a mixing desk of sorts, where he manipulates the flow of air emanating from each fan. And the dance begins.

Our plastic bag takes on a life like no other you’ve ever seen; unfurling, twirling, swirling, dancing, prancing, skating on invisible ice and up, up high, flying, laughing, inviting others to join him. And they do.

This is a magical, extremely clever puppet show. All the puppets are crafted exactly as the first, none of them has strings but are given movement solely by controlled air. Or wind (that Foehn, see?) The performance is beautiful and gasp-inducing, complementing the music perfectly. Ouvrard is a skilled ballet master and his ballerina bags follow his choreography with ease and grace.

My 8 year old kept turning round to me (the kids sit on benches at the front of the audience for maximum view) to make sure I was also seeing what she was witnessing, checking that it wasn’t a trick. She wants to recreate her own plastic bag puppet – who wouldn’t?

Don’t think for a moment that this show is only for children. More than half the adults there were without. I bet they’re all still smiling too. 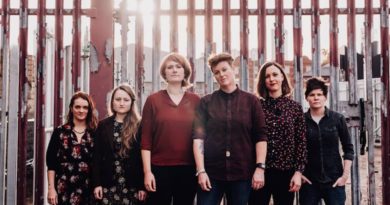