It is a rare treat to come out of the theatre and say loudly to your friends that what you have just seen was one of the best things you have seen in ages but this evening, Living Spit and Kate Dimbleby totally made our evening. The whole show was fabulous and, despite some very minor technical difficulties with the sound, the duet between the two leads was on its own worth making the trip out. Living Spit are a theatre company that I have seen before, their last show was a lot of fun, but it left me wanting a little more from them to really enjoy it. They have a great on stage relationship and there is genuine warmth between them, but there was always something not quite hitting the mark. This evening however, Living Spit truly showed us what they are capable of doing on stage, displaying the heights they can reach with their story telling and musicianship and, with this extra depth, the performance was thoroughly beautiful, wholly enjoyable and often hilariously funny despite the technical issues.

The cast for this production included some new faces and they brought with them a singing voice that evokes deep feelings of the early 1920’s, of smokey blues-jazz bars, of Billy Holiday and Ella Fitzgerald with subtle hints of the modern age just touching the sound of Patti Smith or even Courtney Love at her smokey voiced best. This voice belongs to Kate Dimbleby and as she sang her introductory song, along with a vocal looper and the wonderful Sam Mills on piano; it was so beautiful I found myself sat with my eyes shut, enjoying the darkness and the quiet, just letting her voice fill my heart and my soul. I was slightly irritated when she was suddenly and rudely interrupted by the male cast members, Howard Coggins and Stu McLoughlin, but this was exactly what the cast wanted to happen, for the audience to feel suddenly shocked by their entrance, to see them metaphorically waving the red flags of male oppression and then to see them slapped back down to witness the rise up of the powerhouse that is one of the finest voices on the national stage. Kate was permitted to finish her song and once again, I quickly found that was sat utterly alone in the dark with eyes closed, floating on her music.

The production this evening was the story of Odysseus, returning home after his twenty year odyssey, only to find his wife Penelope at home with over a hundred suitors begging her for her hand in marriage. Odysseus explains to Penelope, along with the aid of his surviving crew member, Anonymous Minion One, why it took him twenty years to return home and yes, this is the epic story of Homer’s Odyssey for all of you classics loving Thespians. I could not tell you how accurately they stuck to the original story, because it has been many, many years since I read any of it and to be honest at the time, I did not find it that exciting, along with my fellow class mates. Luckily, this show was not me being back at school in the 1980s, back in dreary classrooms with gloss green radiators and military teachers droning on and on. Instead this show was vibrant beauty and cleverly silly comedy and gratuitous swearing and most of all, lots and lots of laughter. Add in everything else that Living Spit are so good at, with even more of it heaped on top and yes, I truly believe that as a theatre company, this is the finest thing that Living Spit have produced. Yes, it did start with them telling the audience to fuck off, yes, there was some very rude jokes about the various kinds of sex that one person can perform upon another and yes, both my friend and I cackled like a pair of Shakespearian witches around a cauldron as we watched every glorious second of it.

The entire first half of the show was fabulous, wildly and often inappropriately funny with some really beautiful songs mixed into the fun. However, the second half had moments of such soulful stillness as to hold the audience in a spell of ethereal beauty. The duet between Howard and Kate showed how hard they have worked on this show to make it perfect and although her voice was clearly superior by a long way, his was not lacking and I was almost moved to tears. However during every silent spell of painful darkness, Stu McLoughlin, as Anonymous Minions number two or five, broke the mood with a sharp quip that brought us all back to earth with a painful raucous bump. I have to be honest, a show with just these performers singing or playing to the best of their abilities, without the comedy element, might not be as easily accessible, but it would be a thing of true beauty. With this show, the comedy is the icing of a musical cake and I cannot recommend taking a slice more highly.

I will admit to finding the ending a little surprising, but this says more about my memory of the story than their telling of it, plus the way it was done was utterly inspired and totally hilarious. The final song was brilliant and despite the dark tone it took, what with murdering everyone in the room, I felt a genuine warmth both coming to and from the performers on stage. I was genuinely saddened when the lights came on and we began to leave. Every song was beautiful, every lewd joke was fabulous and what was even more special, I had a really good night out with one of my best friends, seeing a show that we both enjoyed. This is what is so great and so enjoyable about modern theatre productions like this one. There was a time when I feared that the theatre was nothing but endless productions of Mousetrap or dreary social commentary pieces that take two hours to point out the bleakness of modern life. But this show tonight was something really special, something really worth buying a ticket for and given the chance, I will gladly go and see it again. I would also recommend that people who enjoy blues-jazz singers check out Kate Dimbleby’s musical albums, because her voice has the power to break hearts and stir the soul. 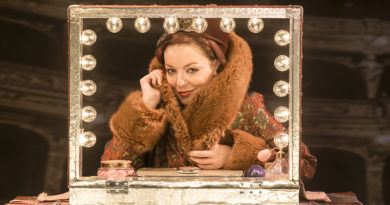