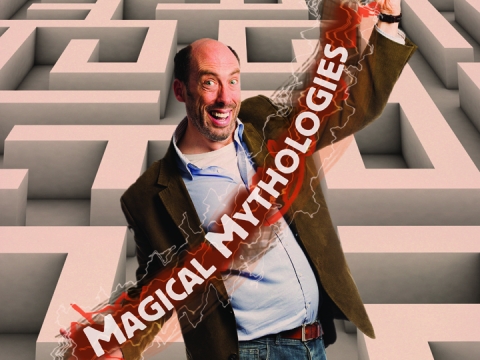 I love a bit of magic. I do a bit myself in my children’s entertainment act and I am developing a magic show for 2015. So when I was asked if I would like to go see local magic legend Peter Clifford I jumped at the chance. But who to take with me? Why not Nailsea’s most popular magician, Steve Burley. Take a magician to review a magician’s show. Genius- why yes I am!

So, Peter Clifford’s Magical Mythologies was a laid back magic cabaret in the bar of the Tobacco Factory Theatre, with about 45 people sat around on tables and sofas, all within spitting distance of the stage – so Peter better make sure he is good or he could get awfully wet.

First obstacle – I’m here to make notes and write a review, but the only seats left are directly in front of the stage where Peter can see me. Right – how am I going to make notes without him seeing me? Answer – I can’t. I’m trying to make notes on my phone but Peter tags me straight away. OK, I’ll do this from memory.

Peter has a relaxed, laid back style. He is confident in his work and owns the stage well. He starts his first trick with a very traditional linking rings – acknowledges that it is an old act that we have all seen, so ups the anti and borrows wedding rings from the audience. He then proceeds to link the rings he has just taken from the audience right before their eyes.

Nice move, and it sets the tone for the evening. Lots of audience involvement and lots of new slants on traditional tricks. He also links it in some of his own journey into magic, giving glimpses of how he became interested in magic as a young boy. There is rope cutting and reforming, there is mind reading, there are predictions and a very funny coat hanger trick (no spoilers).

It is lounge magic. It is not all singing all dancing Vegas. It is close up magic that should have you thinking at last once “OK, how did he do that?” I am not sure about the title of ‘Magical Mythologies’ though. I was expecting at to see as a bare minimum a Minotaur and a golden fleece. I would have gone for ‘Peter Clifford’s laid back close up magic cabaret show that he does in the bar of the Tobacco Theatre’. Hum, maybe not as catchy.

What does my professional Magician friend Steve think of it all? “Very good. I was impressed with how he managed to involve everyone in the room and there was some very smooth close up magic. I had an idea for developing the rope trick myself and I really liked what Peter did with it.” So if a professional magician can watch it and be impressed, then it should be fine for us muggles.