At the Brewery Theatre, we’re plunged into darkness, which is really quite thrilling before anything else even happens. And then the sound of female voices. In the dark. Until the stage lights come on to reveal three women, who appear to be in some kind of agony. Writhing, moving, crawling.

This is Mmm Hmmm, a three woman acapella show written and directed by Bristol-based Verity Standen. She’s joined by the equally Bristol Ellie Showering and Dominie Hooper, who together form a trio of high octane, harmonic devilment.

Everyday, banal situations are turned into something really quite incredible. Ordering chocolate at the First Great Western buffet carriage or drinking tea with a pal (Darjeeling is near-orgasmic, apparently), are given a beauty they probably don’t deserve. The pedestrian is bejewelled, star quality lavished upon it by voice.

Voice. And energy. Blimey, these women are working hard and, by the end of the show, sweat seeps through their very impressive dresses that morph into a whole series of dresses. Harriet de Winton, please will you be my costume designer too? I would really, really like one of these outfits. Any colour. I want to transform myself into a monk or a crazy human pogo stick (at least that’s what I saw) just like these three.

Some of the audience laugh out loud whenever the cast make a mad dash around the stage. I don’t but I’m aware that I’m grinning widely for most of the performance. Mmm Hmmm is eccentric and holds a certain Britishness, as much for the lyrical content as the off-the-wallness of it.

Just when you think it can’t get any sillier, our doyennes of vocal expression take the weirdest tea-break you’ve ever seen as they scoff on dry biscuits (digestives I think), spitting out the dust. Really? As if this piece of theatre wasn’t difficult enough to achieve, they then go and dry their mouths out to such an extent that, surely, it should be impossible to speak let alone come out with those notes? But no, they more than succeed and, actually, go on to perform my favourite part of the evening with ‘You Made me Love You,’ a number to which they seem to lose every inch of self-control and sanity.

As with all enjoyable shows, there is an extra, unseen member of the cast in the Lighting Designer and without James Mackenzie, this show wouldn’t have been quite so clever. He illuminates to create subtlety or intensity, highlighting the talent of these women.

The show is shorter than we expect, which is hardly surprising – any one of them could have collapsed if they’d tried to eek out any more songs. But this is 45 minutes of pure joy and, as they take their bows, I find myself laughing, ‘incredible’ the first word to come out of my mouth. Then, walking down the Brewery stairs, I can’t prevent myself from la-la-la-ing. Once at home, I have to play Kate Bush’s ‘Mrs Bartolozzi’ (though Mark said they reminded him of Bjork and Laurie Anderson).

My only regret of the night was that I didn’t take my daughter so I could show her how funny, innovative and powerful we women are. I might go again.

Mmm Hmmm is on at Brewery Theatre until Saturday 29th November 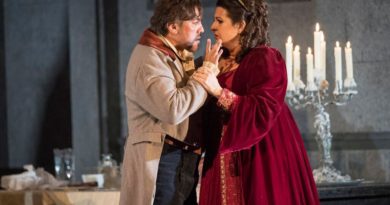