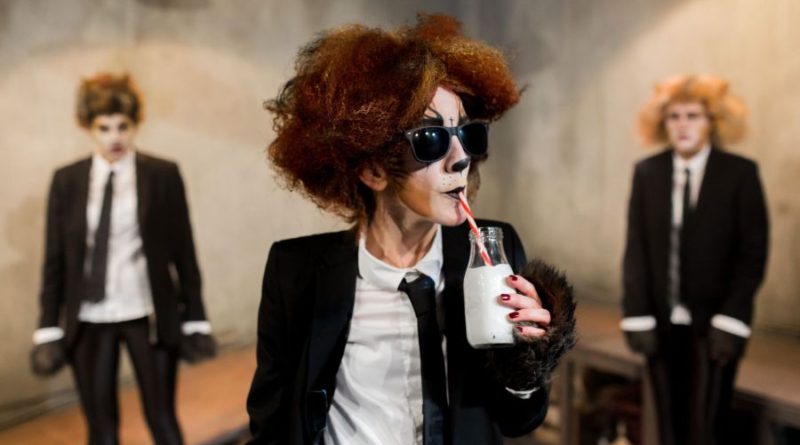 So, I have a confession. I’m not really into musicals. I love theatre and I love music; heck, I even have the musical episode of Buffy the Vampire Slayer on DVD (which is clearly one of the finest pieces of television ever made and I’ll fight anyone who says otherwise to the death), so there are exceptions, but in general musical theatre just doesn’t tickle my whiskers. As a result, I have never seen Cats, so I should preface this with the fact that I probably get about twenty percent of the references in this show. Fortunately I have seen all the Tarantino films about a gazillion times, so hopefully that makes up for it?

I must also confess (this is turning into a reasonably confessional review – where will it end?) that I have been mainly [exclusively] watching and reviewing children’s shows for the last few years, so this gig was a little intimidating to say the least. Fortunately, it turned out to be one of the best things my eyeballs and ears have had the pleasure of evaluating for an age.

From the atmospheric openings to the purrfectly executed finale this show absolutely nails it. [Stop groaning already, I’m really only just warming up the cat puns.] We meet the top cat, the cynical one, the psychopath and the naive kitten. The heist starts well(ish) but soon descends into an extended catfight, with more twists and turns than a falling feline.

The cast are an impressive destruction (did you know that’s the collective noun for cats?). Their timing is spot on, they belt out the songs in a way that seems implausibly room-filling and they ALWAYS land on their feet. Except when they’re dead [SPOILERS!] C’mon, have you seen a Tarantino film? Let’s just say that these cats put George R.R. Martin to shame with the body count.

The unpredictable gang of mogs spray their scent all over the fourth wall by repeatedly clawing the audience into their hilarious bumblings. This is a show where the front row is only for those who don’t mind getting pawed. It’s also not suitable for coeliacs. Or men’s rights activists; but then who cares what they think anyway?

I’m going to be honest here and say that this week has been horrendous and I really wasn’t sure I was even going to make it to this but I did, despite a foul mood and a twitchy tail. I knew it was supposed to be funny but I had no idea that it would make me laugh so hard that I’d snort some excellent local beer out of my nose on, not one, but two occasions during the performance.

So if a feminist mashup of Reservoir Dogs and Cats the musical with lots of jokes about pegging by some curiously alluring cat people sounds like your thing (and let’s be honest which sort of loser wouldn’t give one of their nine lives for that?) then this is the show for you! I guess this is where the confessional review ends then, before I cough up any more furballs / terrible cat-based puns. For all that is good and right in the world, go and see this show. Reservoir Mogs is on at the Wardrobe Theatre until  21st January and tickets are selling out fast.

Lorraine and Alan at The Brewery Theatre