Earlier today I took Ella, 2 and 3/4, to see Room on the Broom at the Old Vic in Bristol, a show that is advertised as for 3+. This show is a mix of acting and puppetry, presented by the Tall Stories Theatre Company and (it hardly needs saying) based on the fantastic Julia Donaldson story.

Ella loved it. This was her first theatre trip, and she wasn’t really sure what to expect but settled on to my lap (she wasn’t interested in sitting in her own seat initially) with her tub of icecream, and by the time of the first tumble and loud snoring she was giggling away. As you’d expect from a 2 ¾ year old, she wasn’t engrossed in the action the whole time; diversions such as the child in the next seat taking her shoes off, noticing the rows of people above us in the galleries, and a desperate need to inform me that the witch was ‘as silly as Alf’ (her brother) took her attention of the stage at times. Overall though, the show more than caught her fancy and whenever her attention drifted something happened to pull it back, with a particular highlight being the first appearance of the dragon.

Other highlights for her included the previously mentioned loud snoring, the funny dog, the witch being held by the dragon (especially when she was bent over his arm and squeaked, and the springy moves she made when the dragon was bashing the top of her head). She liked the parts where the words of the original story were spoken, sometimes joining in with a ‘’Yes’ cried the witch’ and ‘The broom snapped in two!’.

From an adult point of view, I also enjoyed it. There was a slightly confusing start when people were still coming in and settling down while the actors were on (and off) stage playing hide and seek and setting the scene for a brief prologue and epilogue of a group of friends camping. Once the lights went down and the prologue started properly it took a minute or so for the audience to warm up, but then the slapstick falls and snoring got the audience laughing and off we went.

There were four actors/puppeteers, and all were excellent in their roles (even if David Garrud did briefly move the dogs mouth to the frogs voice, something I suspect that most of the young audience didn’t notice but the adults and cast certainly did). Emma MacLennan was a very feline and satisfying cat, and Daniel Foxsmith as the dragon in particular was a joy, even if he did make me think of Cardiff streets after closing time! Yvette Clutterbuck was a delightfully scatty and likable witch. As for the puppets, the dog was my absolute favourite, with his wagging tail, bad breath and overfriendly nature, though the bird and frog were also well characterised.

The singing and dancing was perfect for the audience, with lots of silliness and repetition and the stage was simply designed but very pleasing (‘That’s the Moon!’ as Ella said) and provided nice hiding spaces when needed (‘Behind the tree!’ ‘Behind the rock!’). Audience participation was patchy, but with such a young audience I’d expect that; Ella stared openmouthed at everyone clapping to the music rather than joining in for example.

I would definitely recommend this show for young children, with Ella being the lower end of the age range but plenty there to amuse 6 year olds and maybe even older.

Room on the Broom will be at Bristol Old Vic until 2 April. 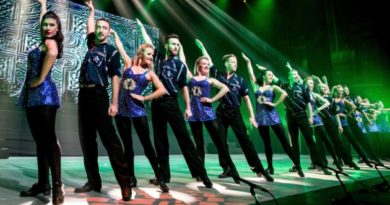 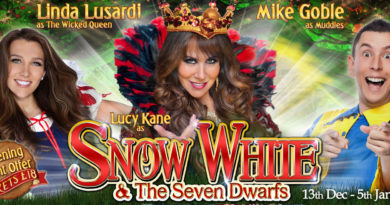 Jane Wenham: The Witch of Walkern at Tobacco Factory Theatre