Opening at a bus stop in London, Grace (Alice Kerrigan) and Adam (Euan Shanahan) make small talk after meeting in a club, stumbling towards a one night stand, while Adam’s long-term girlfriend Ruth (Lauren Waldren) tidies their flat at home and waits for him. The non-linear narrative blends Adam and Ruth’s normality (how they met, their fights, their daily lives) into this night to great effect. For me, the most successful and inspiring moments of staging were when these storylines blurred: Ruth removes Adam’s shirt while he kisses Grace, irons it, and places it back on him; while Ruth and Adam watch TV, Grace’s music blares as she gets ready. Some of the transitions are better than others – same with the music cues; they just lacked some of the finesse and subtlety that I’ve seen with other works.

As with most of Golaszewski’s work, the characters are imbued with this familiarity and authenticity, and the cast members run with this and play every awkward glance, and nervous laugh with a youthful eagerness and tentativeness that feels real and unforced. I commented after that I had been or seen these characters at one time or another. Euan Shanahan’s interpretation of a modern man is realistic and he creates a full character that continues to show new facets, increasingly unlikeable, as the piece goes on. Both Alice Kerrigan and Laura Waldren do the opposite, though this is not a critique. Kerrigan keeps Grace shallow, giggling, never fully committing to the evening or to Adam – there are hints of a full person but not one that Adam really cares about getting to know. Similarly, Waldren’s Ruth is more serious, stable, and yet painfully unsure of herself in Adam’s presence; but we never get to fully know her, and maybe this reflects how Adam has lost interest in her, that her history is no longer important outside of him. As the relationship fractures, Adam looks outward for something more interesting, Ruth clings to him for safety.

Where Alexandra Moxon has most deviated from the original material is with the dance sections interwoven throughout – the trio all take part in choreography inspired by contemporary ballet – again, some of these sections was better realised than others. Earlier in the work, the movement feels silly, and like a bad metaphor for movement or travelling. However, later it starts to sit well within the dialogue, the pieces between Ruth and Adam are beautiful and emotional, and I commend Moxon for being ambitious with the piece.

Sex with a Stranger feels relevant and immediate, full of really stunning moments, and showcasing masses of talent from the cast and crew.

See what else is coming up at the Wardrobe Theatre here

Tea Time at the Brewery Theatre 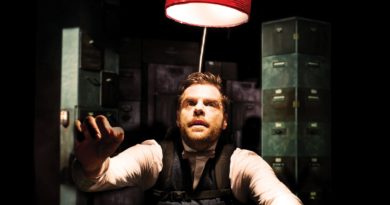