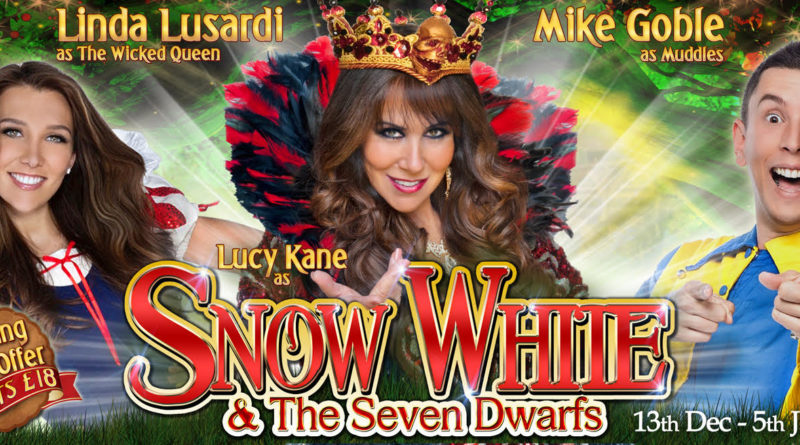 Pantomime’s a funny thing. I’ve seen quite a few over the years, and some have left me completely flat or bemused, or wondering why all this kerfuffle is happening just to showcase a celebrity or two which is fine if you’re a fan but not so engaging if you don’t already like or know them. Last year’s Weston Playhouse pantomime was a gem however, and this year’s show Snow White and the Seven Dwarfs was even better. I left the theatre last night buzzing, with a six year old who was over the moon with the magic of it all and a twelve year old who admitted it was ‘alright’. Even Granny said it was the best pantomime she’d ever seen.

It really was magical, from the wickedness of the Queen to the spectacular special effects in the wood to group of little girls jumping around on the stairs and ‘Oooing’ as the last bits of snow and confetti fell down. It’s a proper traditional panto, with lots of opportunities for shouting at the stage, though as a crowd I have to admit we completely missed a glorious opportunity for some ‘Look behind you’s’. We did a much better job with some ‘Oh no you aren’t’s’ and ‘Oooo-ooh’s’ and ‘Noooooo!’s’, and the ‘Boo’s’ were properly enthusiastic. We even did a little dance or two. There is no lack of opportunity for audience participation in this one – though it’s fine, you can also sit it out quietly if that’s your thing.

The cast were engaging and (apart from the wicked Queen) likeable. Mike Goble, who also directed, is the ditzy Muddles and he completely knows how to do this: he was funny and sweet and sympathetic. Lucy Kane was a lovely Snow White with a beautiful voice. This pantomime’s version of the Dame was Nurse Nellie (Richard Alan) a slightly batty but kind-hearted character who gave poor Jerry in the front row a bit of a hard time. The Seven Dwarves in this show were the  Diddymen who came complete with feather dusters and a song about Happiness, and again were all consummate professionals, bringing us all into the story. Even Snotty wasn’t completely revolting! The dancers – both junior and senior – were fantastic with some very impressive gymnastic moves and great songs.

I loved the fact that the script, although there was an odd little fart joke and some lines that completely flew over the children’s heads but had the adults giggling, didn’t cross the line into areas that Granny wouldn’t approve of. The story was told well and with lots of laughter.

The costumes and set weren’t of the standard you’d expect from a bigger venue and production like the Bristol Hippodrome but that didn’t matter at all. Snow White was beautiful, Nurse Nellie was ridiculous in ‘her’ many changes of costume, there was sparkles and glitter and swirling skirts and everything you’d expect. The Queen’s red sparkly outfit was stunning and one of the things that my daughter, who said ‘I can’t believe she’s bad when she’s so beautiful’, was most impressed with. Even her lips were glittering. She was as engaging as the rest of the cast but definitely not likeable – Linda Lusardi plays a fine villain.

The most spectacular thing though was the spooky wood, and I won’t give away any secrets but you do get given 3D glasses when you go in. It was very, very effective and bought on lots of excited screaming from the Brownies sat behind us. It was ‘nice’ scary though, not the sort of scary to give young children nightmares. Like all of this pantomime it was just perfectly pitched for the audience.

I loved this production and I’d recommend it to anyone. Even the front of house staff were lovely, there was a chance to meet Muddles after the show and the whole thing was just a properly magical experience for all three generations of us. 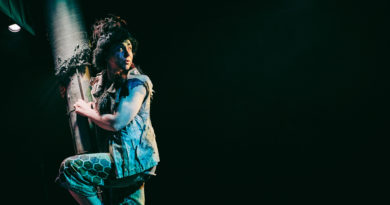