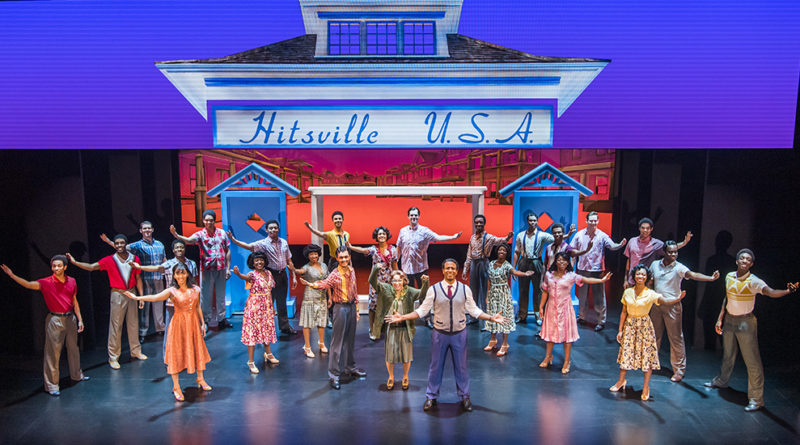 60 years ago today, on 12 March 1959, Berry Gordy founded Motown in Detroit. Coincidentally, Motown the Musical is currently playing at The Bristol Hippodrome, serving as a timely reminder of why the music is still so beloved six decades on.

Motown the Musical begins and ends with Motown 25: Yesterday, Today, Forever, an Emmy Award-winning TV show celebrating the legendary record label’s silver anniversary, and takes the form of Berry Gordy’s reflections on the journey he’s taken to reach that point.

We are taken back to 22 June 1938 to see Gordy’s reaction to seeing Detroit boxer Joe Louis beat German Max Schmeling. Winning that fight made Louis one of the first true African American national heroes in the United States. And left a young black boy believing he could do anything.

Less than 20 years later, he’s on his way, having co-written the first of Jackie Wilson’s five hit records, Reet Petite, and bumping into Smokey Robinson and his group on a visit to Wilson’s manager’s office to sort out his royalties.

Those royalties are disappointingly low, so he borrows $800 dollars from his family to start his own company, releasing songs under several different labels to secure radio play before settling on the Motown brand.

The pace of the show is relentless as we are taken through the 50s, 60s and 70s to 1983. There are more than 60 songs to get through, by artists such as The Supremes, The Four Tops, The Jackson Five, Marvin Gaye, Stevie Wonder, and many more. When you add in colourful costumes (dress envy alert!), bright lights, and nifty footwork, the result is a treat for eyes and ears.

The story couldn’t be more authentic, Berry Gordy wrote the show’s book himself and is its co-producer. But, because they have squeezed in so much music, it does feel a little rushed in places, a bit glossed over. It piques your interest but doesn’t go into deep detail – I was lucky enough to see the West End production last year and found myself spending a lot of time on Google for several days afterwards, keen to find out more.

Several of Motown’s top stars toured the UK in 1965, playing at the Colston Hall on 23 March. At that time the music was still relatively unknown here, only heard by those listening to pirate stations such as Radio Luxembourg in the evenings, and the promoters struggled to even give tickets away for the Bristol shows (there were two on the same evening). Can you imagine that today – Stevie Wonder, The Supremes (Diana Ross in the line-up from the beginning but not yet having been given top billing), The Miracles, and Martha and the Vandellas on the same bill and tickets not selling out immediately?

If you’re feeling a little low after the festivities of Christmas and New Year, this show is almost guaranteed to give you a boost. As you watch and listen, you’ll find your feet tapping, your hands constantly drawn to clap along, and you’ll struggle not to sing out loud (thankfully, there are times when you’re actively encouraged to join in). Eventually the signal comes for everyone to get up and dance and few people ignore it.

In summary, if you love music, you’ll love Motown the Musical.