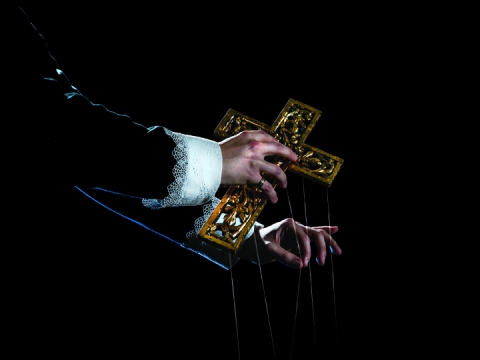 It’s rare for a non-professional theatre group to perform at Bristol’s well-respected and ever interesting Tobacco Factory Theatre. And so, it was with curiosity that I went there to watch one of the city’s longest standing amateur dramatic groups, Kelvin Players, perform a play written by Moliere in mid-Seventeenth Century France.

Bowing to pressure from the Catholic Church, the controversial Tartuffe was banned by Louis XIV but has continued to be a hit in its various adapted versions ever since.

Tartuffe is a conman and he has his claws into the gullible aristocrat Orgon, who has invited this ‘divine’ pauper into the womb of his family, convinced that he is as close to God as it is possible to be. Yes, here a man who should be revered! But, with the exception of Orgon’s mother, the rest of the family reads only fraudulent transparency in the soul of Tartuffe and they plot to expose the trickster for what he really is, with near disastrous consequences.

Tartuffe is performed ‘in the round’ of the Tobacco Factory, which I have always thought a treat for the audience but an extra challenge for the production team and the cast because fluidity is necessary, so that all spectators have the opportunity to see the performance from different angles. Kelvin Players have managed to use this central stage to very good effect, hooking us into each character in turn, allowing us to witness shocked expressions that might otherwise have gone unnoticed, inviting us to study the nuances of individual characters who may not be the central focus of that particular scene. Robin Turner’s considerately studied set helps to achieve this – enough props/furniture to bring the stage to life, without overburdening it, allowing us to really see what is happening.

Ralf Togneri, the Director of this piece, has decided to set the play in the late 19th Century, giving it perhaps a little more accessibility to modern audiences, whilst retaining the political and religious spirit of France during the reign of that earlier ‘Sun King’.  Taking this into consideration, Chrissy Fryers has entwined the two eras in her costume design, making the men’s clothes a touch more flamboyant and the women’s a little more provocative that they might have been if she’d be confined to the 1660s.

The cast are convincing, bringing humour to their performance, and I was both surprised and relieved to find that this was not a heavy play but came with an easy-to-follow script, performed with clarity and confidence. I laughed along with the rest of the audience throughout the farce and heard every single last word spoken.

Nicky Rope as Orgon’s wife, Elmire, had me following her around the stage with her beautiful clothes and her coquettish manner. Fiona McClure, the feisty and outspoken housemaid Dorine, is sufficiently strong in her role but never completely dominates her fellow actors (she easily could have). And the mesmerising servant who never utters a single word, Flipote, played by Patricia Croughan, is difficult to tear your eyes away from during the woefully short time that she appears before us.

But, as with all good shows, this is a team effort and each actor plays the part, I imagine, just as s/he should.

I came away smiling and, once again, near-ecstatic to have been born in the 20th Century.

Don’t ever think that all plays have to be performed by professional companies! Not at all. Tartuffe has convinced me that I need to visit more local amateur dramatic companies in our area.

– Tartuffe plays at Tobacco Factory Theatre until 16th May

You can find out more about Kelvin Players Theatre Co here