It’s a while since we had a night out at Weston’s Loves Cafe. Apart from those couple of activist meetings we’ve just attended. Or when we were there recently for ‘St Icky’s Collage Caboodle – Bring Your Own Vinyl’ (a social art making evening). Oh yeah, and we’ve listened to some excellent poetry during their monthly, expanding-in-popularity ‘Word Mustard’ jams. OK, so what I mean is that Ben Ottewell’s is the first gig we’ve been to at Loves Cafe for a while.

Loves is our effervescent local. Anyone who lives within a ten mile radius of this unique West Street venue and who as ever been in there more than twice may well tell you the same thing. This is the sort of place you could go for an evening out on your own because you’ll always know someone, even if that’s the friendly, ‘come on in’ staff. Loves almost defies definition – it’s a cafe and a restaurant (if you can be both), a community centre, a pub, a music/literature/DJ/poetry venue, an art gallery, a meeting place, a tapas bar, a cinema … We’ve seen some shit-hot acts play in the red curtained window of this refurbished chapel and we always comment that it’s like being in the company of good musicians in the comfort of your own front room.

And some of those musicians have become regulars too. This is singer-songwriter Ben Ottewell’s seventh gig at Loves Cafe. I was at the very first one in 2012, some ten years after I’d seen a live set by Mercury Prize winners Gomez, with whom he was supposed to be ‘just’ a guitarist, though the discovery of his über-powerful soul gravel voice meant that he’s the singer from the band that we all remember. Before he takes to the stage tonight, we drink our pints and chat to our mates. One (female) says, “I come here every time he’s on. I’m a bit in love with him.” Another (male) tells me, “The first time I heard him live, I could feel his voice in my own chest. And his guitar playing is incredible.” “Oh my God,” another (also male), “I can’t believe I’m seeing him five minutes from where I live; I was mad on Gomez back in the day.”

Yep, he’s got it and we know it. The audience barely speaks during his spellbinding performance (anyone who does gets shot down by a death stare or a “sshhh”, ‘cos really, how could you stand there and want to do anything but listen to the beauty before you?). As ever, Ben mixes the past with the present, making us lip-synch to classics such as Tijuana Lady and Free to Run from Gomez’s debut album ‘Bring it On’ whilst introducing us to his hot-off-the-press-brand-spankingly-new craftwork, like the song he wrote in LA the day after Trump was declared winner of the US presidential elections, a truer than true song about lies and liars. Bringing us tunes that span his 20 year career, he always has you staring at his fingers because, weirdly, they barely seem to be moving, yet his acoustic set – one voice, one guitar – fills the room completely. This guy really means what he sings and writes and you wonder whether he ever needed to be in a band at all, except we’re thankful that he was. The audience, united, beams smiles of extra special Loves’ love when he dedicates his cracking version of Smokey Robinson’s The Way you do the Things you Do to birthday girl and locally worshipped Loves Cafe owner, Anna.

After the gig, Ben Ottewell hangs around for a couple of hours and those who want to have a chat with him do just that, highlighting the intimacy of every Loves’ gig that anyone has ever been to. He and I sit outside and mutually declare our appreciation of folk guitarist and singer-songwriter, John Smith (who has also played here), we talk about Ben’s differently tuned guitars and about gigging all over the place. “Loves is my favourite UK venue’, he tells me. “It’s like playing in my own front room.” Now, Ben, funny you should say that … 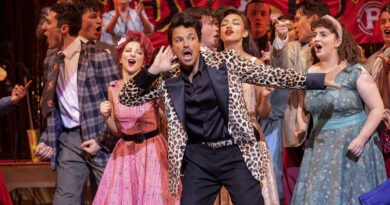 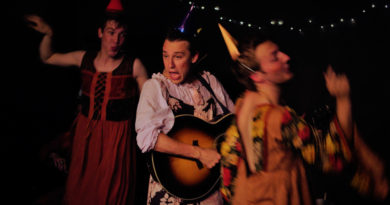 The Cabinet of Madame Fanny du Thé at the Wardrobe Theatre