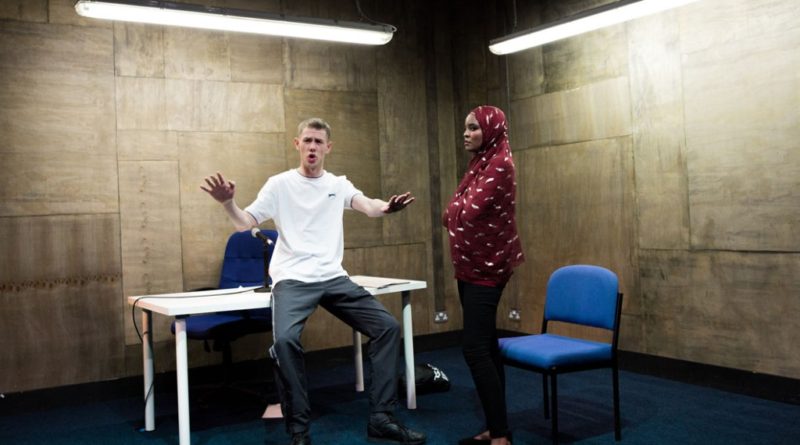 Part of Tobacco Factory Theatres’ a Play a Pie and a Pint season, written by Samuel Bailey and directed by Jesse Jones, Champ is the story of Danny (Josh Finan), the face of white, working class Britain.

Aimless, angry, signing on and seeing nothing much more from his life than that, Danny meets his new Job Centre worker Nira (Alma Eno) and the piece starts from there. Nira starts as a disembodied voice, distant and strange, coming from above. Next to Danny’s simmering frustrations, Nira is practical and calm. She seems omnipotent and detached, that cold voice of a system that can seem uncaring and unaffected when someone is at their lowest. Hearing her voice only before seeing her was a great decision; as she became a person to us, she did to Danny too.

The set is stark: a table, two chairs, and fluorescent lights overhead. Transitioning from one scene to the next using harsh yellow spotlight just on Danny and blaring excerpts from Roald Dahl’s ‘Danny, the Champion of the World’ is jarring and gave the play an edginess that I thought was brilliant.

Alma Eno plays Nira beautifully – on paper the part could read as the straight woman, the prop necessary for Danny’s journey, but she is something all her own. She has her own private narrative that peeks out of her professionalism, but more than that, she is so many hard-working and vital people that work in this kind of industry – that overworked, underappreciated worker. Her transformation from voice to person, the system to the human, feels organic and honest. Danny and Alma’s fragile and growing friendship is intense and lovely, the centre of the piece, and there was something really special about this narrative of two disenfranchised people (one white, uneducated, working class male; the other a Somali, Muslim female) learning from each other, transcending their own expectations of themselves.

Underneath all of Danny’s aggression, frustration, Josh Finan presents him with incredible vulnerability. Danny battles between explosive and dismissive, but stays loveable and charming. And at his core, he is just kind of lost. His father remains his idol, despite having left Danny and his mum years ago. In Danny’s eyes, his father represents all of Danny’s potential, all of the opportunities that would open up if he could just get to him. His dad lives abroad, is a games console-tester, a rally driver, his dad is funny and beloved by all. Misunderstood and underappreciated by his mother, an absent father who once took him camping in Devon is the best he can do for a hero, for a guide. And without that, Danny feels more committed to his own stereotype than anyone else.

Josh Finan plays Danny as a person full of everything, ready to do something, his potential bursting out of him. We could laugh at him, cry with him, but more than that I rooted for him. Having formerly signed on, I have sat next to Dannys, sat opposite Niras, waited patiently for someone to tell me I’d done just enough to get my money for that fortnight. In people’s hands that didn’t care about Danny or Nira, it would be really easy for this piece to devolve into an After School Special, (the wise and kindly worker helps the angry youth to just believe in himself) but Champ never goes to that place. Both the writer and director seem to love these characters, to recognise them as people, not just props for a moral, a message about the working class. The final scene is heartbreaking and raw, and I was relieved when I could see other audience members crying with me. It stays clear of melodrama by staying true to the people it’s about right until the final lights go out.

Champ is a collaboration of incredibly talented individuals, and the work had a vibrancy, a youthfulness that feels necessary for new theatre.

Champ is at The Wardrobe Theatre until the 19th November, part of Tobacco Factory Theatres Beyond’s a Play a Pie and a Pint season. 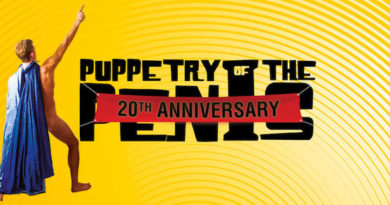 Puppetry of the Penis at The Playhouse, Weston