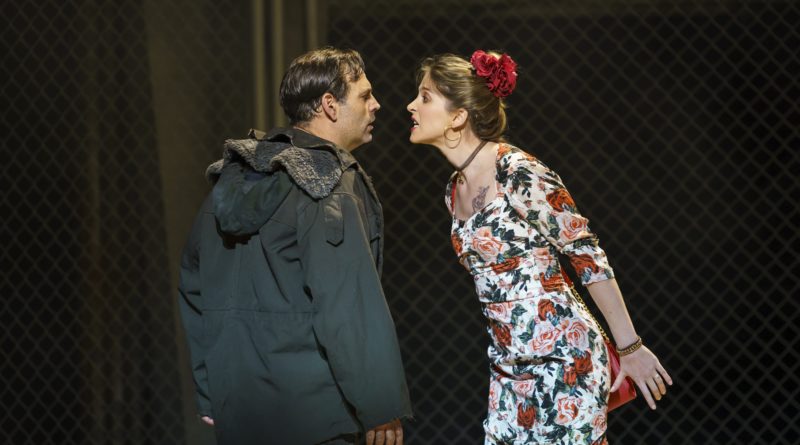 Carmen is all about the story and as so often with opera it’s one of love, betrayal and death. This one is slightly different though – the female lead is a strong woman who is thoroughly in touch with her own sexuality and quite capable of manipulating men and situations to get what she wants. Or to look at it another way, she’s a young woman who has little in the way of education, money or life chances and makes the most of what she does have. It’s interesting though because really you don’t get a look into how any of the characters are thinking. We see actions and hear what they say, but all of it could be interpreted in different ways and in fact I believe that Welsh National Opera (WNO) have tweaked the dialogue a little for this production. There are lots of different lights that could be shone on this story; is Carmen just a common slapper who gets what’s ‘coming to her’? Is Jose a controlling monster or a weak clinger-on? Is Escamillo getting a kick from winding things up still further?

We’re introduced to Carmen (Virginie Verrez) at the end of a shift in the cigarette factory where she works. She stands out from the start with men flocking around her. Unfortunately she chooses to approach Jose (Dimitri Pittas), who from the start is a little on the dark and brooding side and seems to have some dark secret or at least a difficult relationship with his mother. It seems he also has a very strong possessive streak, and he wants not just to be with Carmen but to own her and control her. In his defence, she doesn’t treat him well; not only does he go to prison for helping her out, but when he is released she emotionally blackmails him to desert the army and join a militia. So you can understand why he might be a bit narked when she quickly gets fed up with him, but as she says herself ‘if you continue to behave this way I’ll end up not loving you at all. I don’t want to be bossed around’. Which is indeed what happens, and tragedy inevitably follows when she falls for the glamorous Escamillo (Phillip Rhodes), who knows from the start that Carmen’s relationships usually only last a few months.

There was a bit of me that felt quite exasperated with the lot of them at the end; none of the romantic interests, apart from Micaela (Anita Watson), really come out of it looking good. Though of course only one of them stabbed and killed his ex-girlfriend because she said no to him, the others just behaved like human beings, fallible, exasperating and trying to make the best of the world that they have.

I didn’t really engage with any of the characters fully, and I was surprised to find that I didn’t have the feeling of being through an emotional wringer that I have had with some operas. There were things I found really touching – the bond between the female friends Carmen, Frasquita (Harriet Eyley) and Mercedes (Angela Simkin) in particular.

That doesn’t mean I didn’t enjoy this production though. It’s not visually flamboyant, the set and costumes were understated, colours were muted and the lighting subdued but it all came together to make a very effective whole. The  setting of a Brazilian favela or slum brought out the feeling of poverty, of the limited choices and restricted horizons that the characters have.  There was beauty in the movement of crowds, the lighting that perfectly and subtly took the attention from one part of the stage to another and the flashes of colour in some costumes; Carmen’s yellow skirt, the bullfight vendors red headdresses.

Carmen doesn’t have the vocal showiness of some operas; there’s no coloratura, the vocal trills and warbles. This one is somehow cleaner, simpler (and I am always conscious that more cultured opera-goers might disapprove of my attempts at description). It’s like the difference between gothic and art deco buildings; both can be stunning but with very different characters. Carmen is also strangely comforting; as someone who has a world of listening and learning about opera still to do, hearing so much music that is familiar and unchallenging has its own pleasures. As someone who particularly loves the sounds produced by large groups of well-trained voices singing together, it’s also great to have the chorus on stage so much. I’ve heard Toreador a million times in various forms, but none of them will ever compare to the overwhelming beauty of being in an auditorium with unamplified live voices filling the space with sound. There is nothing quite like it.

So would I recommend seeing this production? Absolutely. Not only is there spine-tingling singing, great music and a beautiful set, but there is a storyline that now, the morning after, is still giving me lots of reasons to think about the rights and wrongs, about how people interact, about how some stories don’t change over place and time and how woman are judged for their actions compared to men.

Carmen will be at the Wales Millennium Centre, Cardiff and other venues including Bristol Hippodrome at various dates between now and Spring 2020.

Jersey Boys at The Bristol Hippodrome