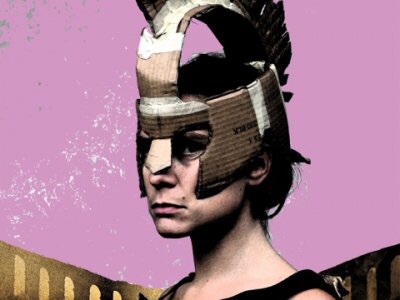 Pauline Morel and Susie Donkin are Spitz and Co, a French/English comedy duo who have the edge in silliness that always makes me laugh till I cry. Mark and I are privileged enough to be able to say that they’ve had us in stitches in the Studio of the Bristol Old Vic, in fits of giggles at the Wardrobe Theatre and in convulsions at Tobacco Factory Theatres’ Brewery, so how would their brand of daft and energetic humour translate to our seaside town of Weston-super-Mare?

Gloriator kicks off Tropicana Theatre’s Autumn/Winter Season and what better show to do it? This former seafront swimming pool had been derelict for years until new life was breathed into it by the arrival of Banksy’s hugely successful ‘Dismaland’ in the summer of 2015. Since then, the venue has played host to a number of events and festivals and, excitingly, Theatre Orchard and North Somerset Council put their heads together to create a programme of inexpensive, high quality pop-up theatre. Now in its third season, theatre at the Trop, as it is affectionately known by us locals, looks like it might be here to stay.

The venue is warm, cosy and most importantly – full! As the audience settles into its surroundings and tunes into what is happening on stage, the glow begins to spread and the chuckles turn to guffaws, Donkin becoming increasingly attractive in her role of the down-trodden, not very adept and somewhat neurotic stage manager, Josephine Cunningham, who hopelessly tries to please the glamorous, world-famous French actress Gloria Delaneuf (Morel). Gloria is a master of theatrical methods and it is her job to inject The Female into the Hollywood blockbuster ‘Gladiator’. Ta-da – Gloriator is the result. On a budget. With an incompetent Cunningham and an exasperated Delaneuf.

This is a hilarious show, even the second time around, even when you know more or less what’s coming, although each performance is tweaked to make it feel like a personal theatrical treat for your home town. When Cunningham puts on a school-mistress persona and berates me for laughing, I dissolve into a mush of happy tears and unrelenting sobs of glee. At various point throughout the hour long show, I thought the man behind us was going to keel over, unable to breathe any longer. Contagious, isn’t it, that laughter medicine stuff?

Comic timing, clever physicality, a love of the utter ridiculous and the ability to bounce off each other totally, Donkin and Morel are easily my favourite female comedy duo. And as luck would have it, they’re back at The Trop with a different, equally silly show soon! Can’t wait!

Spitz and Co will be performing Glorilla at Tropicana Theatre on 25th November – tickets here. And you can read our review of Glorilla here. 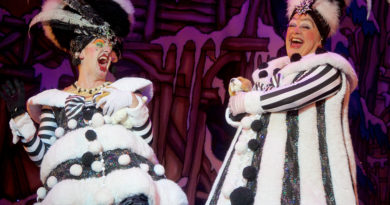