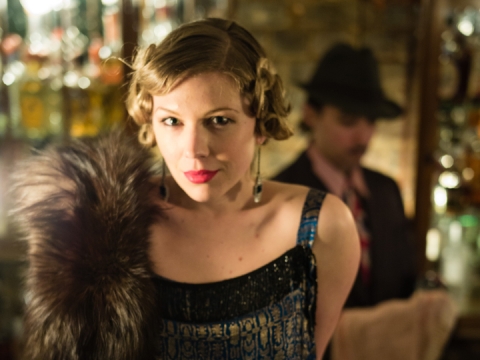 I’m no seasoned opera goer. In fact, the only one I know is La Traviata and that’s only because we bumped into it by accident last week in London’s Trafalgar Square, to where it was being transported from the nearby Royal Opera House for consumption by the wider public, most of us sitting on inflatable white cushions, gazing up at the huge screen with Nelson’s Column as a rather impressive backdrop.

So another first for me.  But even I can see the massive difference between that throw-every-penny-at-it production and this, Opera Up Close’s opera-in-a-box.

So, yes, we know the story, which is a propitious start for my girl, the only child in the audience of the main auditorium of Tobacco Factory Theatre, and me. “It looks different in here,” she says upon entering. Indeed it does and the set excites me.

This isn’t 19th Century Paris!  This Violetta is a woman surrounded by the glitz of 1920’s New Jersey – if you’re thinking Great Gatsby, you are spot on.  A veranda, movable windows, a chaise longue, liquor, a gramophone (!), more than a hint of the Charleston in the midst of prohibition.

Even though there are only five people at this party, I prefer the intimacy of it to ROH’s bustling stage. I feel as though I too am a guest here and I’m pretty sure I’ve met the coquettish Flora before, played so well by Zarah Hible. Warm, fun-loving, beautiful, loyal Flora, a woman anyone would want as her best friend. Even when Hible isn’t throwing her clarity of voice around, I can feel her strength. Would Violetta ever have survived so long without such a friend?

The women completely own this show and, given the subject matter, so they should. Violetta is just lovely; Louisa Tee plays her with such honesty.  A brave, genuine heroine, you can see why Alfredo would fall in love with her. Tee’s voice is clear and strong, her look perfect and her character sincere. Her strength beats poor Alfredo into the ground – would a woman like that really go for such a meek man?  But, ah, this story is about the inequalities of the sexes and Violetta is a fallen woman, here a gangster’s moll, riddled by sickness. She has no right to demand love, she’d never really dreamed of it. Though, look, here is a chap declaring a love strong enough to defy all that – he’ll be there for her always.

She grabs this last chance at happiness, ready to leave the glamour behind. Until that interfering father of his urges her to leave Alfredo. David Durham’s Germont is easily the strongest male performance, his maturity shines, his voice flies. A politician, Germont is also a concerned father; Violetta’s relationship with his son is ruining his family, scuppering his own daughter’s own chance of marriage. And, perhaps more importantly, it is damaging his career. She MUST leave him and he plays beautifully to her vulnerability, “Just picture it one year from now, the honeymoon is over, your beauty is familiar and he is bored.” What an arse.

Opera Close-Up’s La Traviata is an English version, another stroke of luck for a couple of opera newbies. And Robin Norton-Hale has made a good job of it. During the interval, I heard someone in the audience wonder whether this was how it is for Italians, being able to understand every word, not having to work hard at all to enjoy the performance. She thought it banal; I would say insightful.

The trio of cello, clarinet and piano, led by Elspeth Wilkes, is not the grand orchestra you’d expect for Verdi’s masterpiece but it compliments the size of the theatre and the scaled-down cast perfectly.  The girls did good 😉

At the close of La Traviata, it was Zarah Hible who got a ‘whoop-de-whoop” from me. Louisa Tee was alway going to get a great deal of that from everyone else.

La Traviata plays at Tobacco Factory Theatre until may 31st

The Case of the Frightened Lady at the Playhouse, Weston 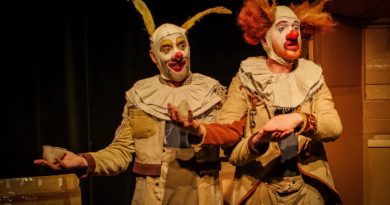 One thought on “La Traviata at Tobacco Factory Theatre”