“Who wants to play war?” is the playground battle cry that echoes around the Bristol Old Vic as Pink Mist, a play Written by Owen Sheers and directed by John Retallack and George Mann bursts into action. Arthur, Hads and Taff are three school friends, who are all struggling to be something better and make more of their lives. The world they live in offers them little in the way of a future, so these boys sign up to the army, in the hope that it will make them men. Men are made in basic training, and in the combat situations that are thrust upon them in Afghanistan. But at what cost to them, and the women they have left behind?

On entering the auditorium, I was immediately struck by how intimate the staging made the production feel. The stage had been built over many of the seats in the pit, so in our dress circle seats, the actors were so close we could see every facial expression and feel like they were making eye contact with us. And our young cast of Erin Doherty, Phil Dunster, Peter Edwards, Rebecca Hamilton, Zara Ramm and Alex Stedman were absolutely flawless as they took us on this heart-breaking story of the perils of war and the aftershocks experienced by so many on these soldiers return. Director George Mann is also responsible for the choreography which features throughout the show and that was so integral to it. The music of Portishead and Massive Attack, so evocative of the Bristol music scene that I knew in the early part of this millennium, featured heavily.

Pink Mist differs so much from other plays concerning war I have seen in Bristol, and bloody hell, have there been many over the last few years. Why did it differ? Well, this one was ABOUT Bristol. The accents were Bristolian, the places described were places I have been, have drank and danced in, places I have driven through, walked through and am familiar with. And it made for uncomfortable yet compelling viewing. This was no play about a war from history, this was a conflict from my lifetime. The boys of the play were, of course, fictional, but also boys that I felt like I knew. Boys I could have gone to school with. Boys that would have chatted my mates and me up in clubs and made us roll our eyes at their arrogance. But I felt for these boys so badly, and was made acutely aware of their vulnerability. I was stirred to want to go back in time to a party I remember well. I ended up in a massive, shouting row with a squaddie boy, a friend of a friend. I took a rare but intense dislike to him and his extreme cockiness. I raged at his tales of how he treated ‘the natives’, and felt bemused at his boasts of what a laugh it all was, that tour of Afghanistan with his mates. I was so angry at him being so seemingly flippant about it all. After watching Pink Mist? I’d like to go back and ask him if he is OK. I’d like to apologise to him for having no real idea what it must have been like, yet still expressing my opinions loudly about something I really could not have imagined. I’m wondering what horrors he saw that he was covering up with his arrogance, and what that conflict really did to him. And the women of the play? My maternal instincts were stirred. I wanted to rage with those mothers and girlfriends, scream along with them in solidarity for their grief at the damage done to their boys.

Pink Mist is quite simply a truly affecting, magnificent and triumphant piece of theatre. But really, the key point of the review is this. I could have done away with all of these words and simply told you what happened at the very end of the show. The cast of Pink Mist were the worthy recipients of a standing ovation. This is worth a mention, as standing ovations are so incredibly rare at The Old Vic that you know you have watched something special indeed if you find yourself rising to your feet along with the rest of the audience. The highest of praise indeed, which this show certainly deserved.

An Officer and a Gentleman at Bristol Hippodrome 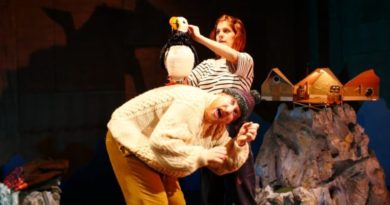 Much Ado About Puffin at Tobacco Factory Theatres