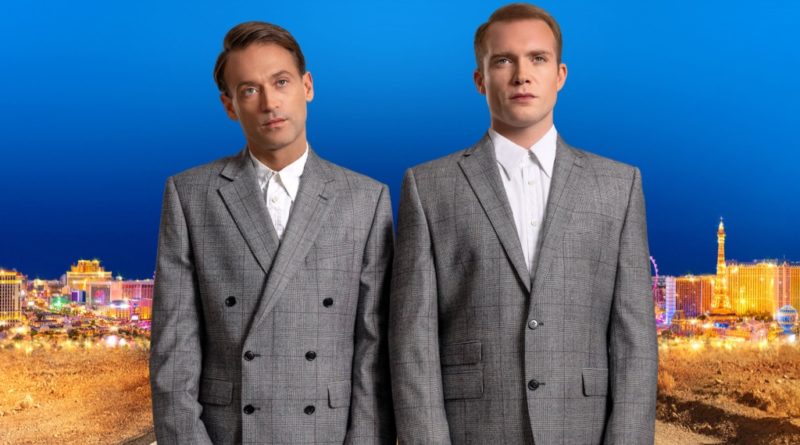 Well, I think I can safely say that this inaugural Classic Screen to Stage Theatre Company production of Rain Man is destined to be a smash hit, because the opening night has just given me one of the most uplifting, touching and downright riveting theatrical experiences of my life; thank you so much, the ever fabulous Bill Kenwright!

Based on the film which won 4 Oscars in 1988, this is the story of two long lost brothers, Charlie, a cynical and self centred salesman and Raymond, an autistic “Savant” with a genius for numbers.

Upon the death of their father, Charlie discovers that the older brother he seemingly knows nothing about has inherited the family fortune, so he abducts Raymond from the institution he has been in for many years, and they embark on a road trip across America together.

Having loved the film 30 odd years ago, and aware that views on Autism have changed beyond recognition during that time, my concern was that I would be wincing in places due to outdated phrasing and opinions, but this screen play was written by masters of their craft, and I was hooked right from the opening scene.

Chris Fountain was utterly convincing as the scheming Charlie, with frustration and fury slowly being replaced by understanding and love for the brother he finally recalls as his “Rainman”, while Adam Lilley as Raymond was outstanding; every physical reaction, facial expression, sequence of phrasing that made him feel safe being a perfect depiction of the state of being of so many autistic adults.

The role of Susan, Charlie’s long suffering girlfriend, was beautifully portrayed by Elizabeth Carter, and I all but stood up and cheered when she gave Raymond his first ever kiss from a woman, a wonderfully poignant moment; then roared with laughter when she asked him how that felt and his considered response was “Wet!”

This production was not just a piece of theatre, but something beyond a skilled portrayal of family estrangement, disability, growing affection and human to human understanding. The final scene with the touch averse Raymond resting his cheek against his brother had me in tears; a minute later, the entire audience rose to its feet in rapturous applause.

Rain Man is a wonderful experience, and is at the Playhouse, Weston until Saturday 20th April… please make it a sell out in Weston-super- Mare!!!

Jason and the Argonauts at Theatre Tropicana