Just last month, Selina Thompson returned from an epic three month sea journey from UK to Belgium to Ghana to Jamaica and back to Europe in a bid to follow the triangle of the Transatlantic Slave Trade, hoping to find out more about herself and the legacy that slavery has bequeathed all of us. Kudos to her then that salt., the culmination of thoughts and recordings from that journey, is already performing at Arnolfini as part of Bristol’s festival of contemporary theatre, Mayfest.

Ordinarily with an actor/performer, I would from here on in refer to her by surname only but, in this case, I will call Selina by her first name. Because this is an intimate piece of theatre and Selina’s connection to us is vital, the delivery personal and her story very real. This warm 26 year old black woman from Birmingham is confiding in us, humorously and frankly. Where is she really from? – this, like many other questions that involve provenance and racial identity could be seen as ‘problematic.’

It must be tiring and a little dull, being kept on ship for so long, treated as cargo, reduced to tears, shouted at by another black woman, who in turn is being victimised by the crew, who are being undermined by the master of the ship and on it goes until we reach the behemoth of imperialism, which lords it above everything and everyone, dictating how the whole sorry mess should be and behave. To denote each link in this inhumane chain is a huge slab of rock salt that Selina bashes up with a sledgehammer, repeating herself to the point of reciting a Litany. And every rung of the ladder is affecting her – she, right there at the bottom of the heap, this black woman travelling more or less alone (I’m never quite sure whether her fellow passenger who treats her so abominably is actually another person or a representation of Selina’s societally received hatred for herself, her colour, her gender?).

We hear recordings of the thoughts of others that have been collected along the way and particularly powerful are the Soothsayer-like observations of a Caribbean woman who tells members of the Windrush generation what they can expect in their new life, reminding them that they will never return to the palm trees and sunshine they have always known. I enjoyed revisiting Channel 4’s TV show Desmond’s, where Shirley Ambrose heartbreakingly confesses to Pork Pie that Peckham is her home now, the place where her family and friends are, and has been for 32 years, the bigger part of her life. She has nothing ‘back there’.

Some of the props and devices used, though, are perhaps superfluous to Selina’s telling of her story and the production could benefit from a little tightening (90 minutes was maybe too  long) but this is an honest look inside the heart and mind of a performer who can only flower. Selina has something to say and, in fact, I think that this piece would work well as a pure spoken word performance because she owns a natural poetry. Actually, I’d really like to read the script as a piece of art in its own right. With a little refinement, over time, salt. could become an important treatise on race and identity.

Mayfest shows in venues all over Bristol until 22nd May

The Record at Bristol Old Vic 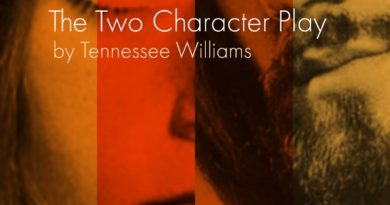 The Two Character Play at the Alma Theatre