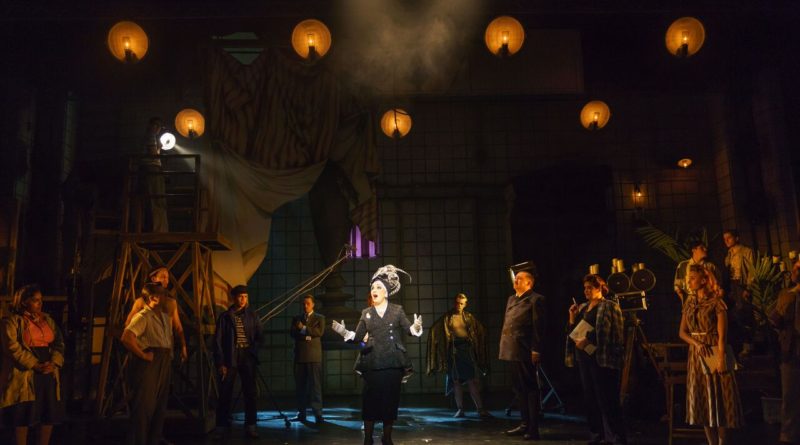 I’m not really an aficionado of musicals; there are a couple I love (West Side Story being one) but normally I am a little ambivalent about them. I knew absolutely nothing about Sunset Boulevard, so when I headed to see the Curve production at the Bristol Hippodrome presented by Michael Harrison and David Ian which is directed by Nikolai Foster and stars Ria Jones as Norma Desmond, I took my musical loving sister in law so that an expert was present to help me critique the show!

Andrew Lloyd Webber’s award winning musical Sunset Boulevard is based on the 1950 film of the same name by Billy Wilder. Silent screen goddess Norma Desmond refuses to accept that her fabulous career is over, and hires impoverished screen writer Joe Gillis to help her work on the script she believes will put her back in the spotlight. As he gets drawn into her luxurious Sunset Boulevard mansion and seduced by the riches she offers him, he submits to her romantic feelings for him despite also feeling confined by her claustrophobic desires and the fantasy world she inhabits. When Joe falls in love with another woman he tries to escape his gilded prison, with dramatic consequences for everyone involved.

This show is a plush affair, with plenty of 1950’s glamour in the costumes, choreography and staging. Ria Jones is excellent in the role of faded starlet Norma. Last year, she was promoted from her role as understudy at the London Coliseum when Hollywood superstar Glenn Close who was playing Norma was indisposed, and received rave reviews. It’s easy to see why; she is commanding and fabulous, and I ultimately found myself empathising with her plight, sensing her fragility and confusion despite the glamorous persona and sense of authority she attempts to convey.  For me however, the standout performance came from Adam Pearce who played Norma’s long-suffering yet devoted butler Max. His vocal range was extraordinary; deep rich baritone, yet able to move swiftly into higher ranges with a beautiful ease. I am not skilled in describing the technical quality of a voice, but I would describe his as the vocal equivalent of exquisite, velvety chocolate. Dougie Carter gives a solid performance as screenwriter Joe, holding the show together competently and allowing Ria to shine, as is his characters job. Sometimes the reason I am not a huge fan of musicals is that the characters can be a little too saccharine sweet for my taste. One character who easily could have pushed this button for me was Betty, played by Molly Lynch. A sweet young girl with fiery ambition that had not yet been tainted by the cutthroat world of the movies, she managed to play the part with a kind of old fashioned gusto, sweet without being sickly and I liked her very much.

Even though Sunset Boulevard was born in the 50’s, the subject matter feels timely and relevant, particularly with the tremors of the #metoo campaign which has forced Hollywood to take a good hard look at itself and the way it treats women. On a wider scale, its sadly still all too common in the world of entertainment that men seem to get more interesting parts as they get older, the older man in a film more often than not has a young, beautiful woman on his arm, men still seem to hold a lot of the power and woman are seen as past it when they hit their 40’s. As a woman who has just hit her 40’s, these issues resonate with me even louder than they ever have. There are some strong, older woman in the film industry but most woman would probably agree that the plight of Norma who is cast on the ‘scrap heap’ as she ages is much more common. The themes in this show are darker than your average musical and maybe this was why I liked it as I found it thought provoking as well as entertaining. I was surprised by the number of songs I knew from the show, but have also found myself humming the tune of some of those I didn’t well into the next day and beyond. This always helps with a musical as my attention was held and I remained engaged. However, even if you don’t know the music I would say that this production of Sunset Boulevard was good looking, a well-staged spectacle and the show itself has a story line that is easy to follow and therefore its really accessible. Above all, I found it enjoyable and loved being swept up in the old school Hollywood glamour of it all. The measure of a good musical for me is that is makes you want to see it again one day, and I certainly felt like this about Sunset Boulevard.

Sunset Boulevard is on at The Bristol Hippodrome until Saturday 19th January.