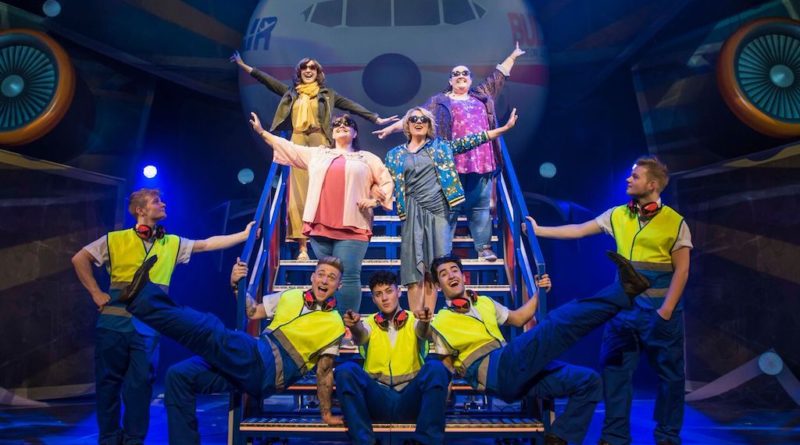 It turns out that you don’t have to be a Take That fan, or even know all of their songs, to enjoy The Band, a heart-warming show that features their multi-million selling back catalogue. My 11 year companion’s first words at the close of curtain – “That’s my new favourite” – prove that you don’t even have to be a woman in her forties (though the vast majority of the audience in this sell-out opening night at Bristol Hippodrome are) to adore this musical.

Though it features all their best known hits, The Band isn’t about Take That at all but it has everything to do with the hopes and dreams of youth and the truth that, even though life’s journey may take us to places we’d never imagined, that thirst for living never really leaves us. The essence of who we were and will always be persists.

Five schoolgirls, on the eve of taking their GCSEs, manage to see their pop idols live in concert. The 1993 TOTP sensations are only ever referred to as ‘the boys’ or ‘the band’ and their is no personalisation of the five dancing, harmonising, muscular boys on stage, who only sing and never speak because they don’t really matter; they are ubiquitous, a product of their time. They could be The Monkees, The Osmonds, Wham!, One Direction. What matters here is friendship and, I would argue, there are very few women in the audience who can’t relate to one of these young women (or, more likely, an amalgam of them – the bookish one might also be promiscuous, say. Being competitive or sporty doesn’t preclude you from being a romantic, for example). Tim Firth has written a thoughtful, sometimes very funny and at others poignantly sad, script that actually tells an easy to follow story without attempting to simply shoe-horn in a shed load of famous songs as so many Jukebox Musicals do. (“The sad bits made it happy” pointed out the wise child seated next to me)

After the concert, the 16 year old best friends stand on the rocks above their northern English hometown and make a pact to never loose touch with each other. Ah, if only things were so simple. Forward 25 years and we see four of them reunited as they travel to see the band once more. These women are a gathering of completely likeable and flawed human beings. Excellent performances all round from the younger and older leads – I can still feel Rachelle Diedericks’ effervescence as the everything-to-live-for Debbie. Older Claire (Alison Fitzjohn) powerfully reminds us how we can be quick to judge other people. Both the young and older Rachel (Faye Christall and Rachel Lumberg, respectively) pull everything together with no sense of her being ‘the ringleader’ (though doesn’t every group of female friends have that Queen Bee?).

The set of The Band is among the best I’ve seen in a touring show – the boys are literally everywhere, appearing where you least expect them to. Jon Bausor’s design is fresh, exciting and finely detailed. Powerful, sometimes blinding (just like a real stadium gig), lighting design by Patrick Woodroofe and a splash of pyrotechnics keep us wowing and wooing throughout. The band themselves, winners of The Beeb’s ‘Let it Shine’ 2017 talent/reality TV show, are über-energetic and Lydia Hardiman has produced some imaginative and amusing costumes for them – look out for the statues! Ha.

The real measure of the success of this musical is the audience though. From the first beloved Gary Barlow song, they are with it. No warming up just Bang! Totally up for fun – I reckon most of them didn’t anticipate crying though. And not simply with nostalgia.

This definitely could be magic. Very entertaining.

The Band performs at Bristol Hippodrome until 28th April 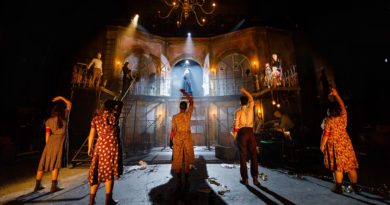