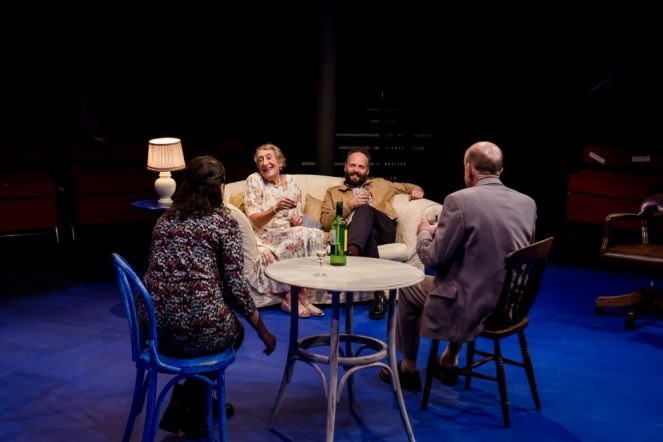 The diversity of the Tobacco Factory staging is always a joy. Blue Heart is staged in the round as it should be, creating an intimate yet voyeuristic quality that lends itself to the play perfectly. The minimal set is cast with a cold blue light conjuring a sharp focus with a luminescent kitchen table, hinting at a healthy dose of the surreal.
I have seen Blue Heart before, 19 years ago – at the Theatre Royal in Bath. I remember it well as it was unlike anything I had seen before and I was intrigued to see if this production could surprise me again after all this time. I wasn’t disappointed. The casual repetition of the detritus of domestic life, interwoven with genuine absurdity had me both roaring with laughter and holding my partner’s hand tightly. The infinite possibilities laid out on the stage illustrate the myriad possibilities that life holds – the ‘sliding doors’ moments and opportunities for change hang in the middle of the intimacy of domestic drudgery. Amanda Boxer (Maisie), Andy de la Tour (Brain) and Amelda Brown (Alice) were stunning in their exquisitely timed, beautifully crafted performances. Each character could have filled the stage on their own. We see them dance around each other in a familiar repetition of routine. They are all cleverly dressed in beige, underlining their understated domesticity. Each actor is a master at work and, while portraying characters who are chasing the unravelling strands of their minds, their performances are impeccable.

The script expertly plays with the pain of predictable patterns in relationships, decorating the stage with accents of complete bizarre bonkersness. I won’t spoil it and tell you what they are – just keep your eyes peeled…

The trust the script puts in the hands of director David Mercatli and the cast is palpable. Once the story is set up the actors carry it through tone of voice and body movements. Enhanced by the simplistic yet versatile set, the audience witnesses dialogue that gets straight to the heart of human emotion and plays with them like puppets.

Do not go to see Blue Heart expecting a traditional play with a
beginning, middle and end. You will be treated to two ‘exhilarating one act plays’, the first Heart’s Desire the second Blue Kettle. Heart’s Desire is basically a family awaiting their daughter’s return from Australia and in Blue Kettle one man deceives five women into believing he is their long lost son.

Image by The Other Richard 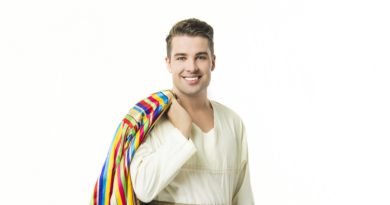 Joe McElderry comes to the Playhouse, Weston, in the role of Joseph

William Tell at The Bristol Hippodrome