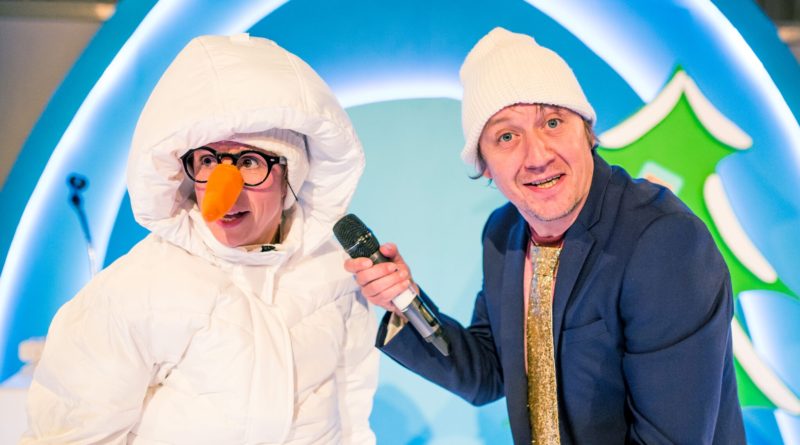 Snow Globe is a production with a target audience of 3-7 year olds and I can confirm that I gave it a thorough road test with both my 3 and a 6 year-old and can say with certainty that it was enjoyable for both. My 3 year-old was captivated from the beginning – proper belly laughs within the first minute. Kid Carpet and Co really know how to entertain families, the humour is light but there are some sneaky jokes in there for the parents – hanky pancakes anyone? The storyline is simple and easy to follow, there is a fair amount of interaction with the audience and it’s particularly charming when one of the children shouts out something unexpected and they go with it. There are some things that are difficult to understand, the celebrity references in the show passed my children by – and I’m willing to bet there were very few 3 year olds in the audience who knew who Gary Barlow is.

Overall this show is a lot of fun, the venue (chosen by Bristol Old Vic due to the temporary closure of its own Studio space) is welcoming and the staff are great with the kids. The whole ethos behind this is jovial, the children are encouraged to move around and make loads of noise. The atmosphere is relaxed, which is just what you need in the hustle and bustle of central Bristol at Christmas. It’s perhaps a bit long; my youngest gave signals that he had had enough about 45 minutes in to the hour long show but at this point audience participation was turned up a notch which kept him hanging on in there.

Having done a small amount of research on Kid Carpet it seems he fell into family entertainment, but what happy chance that was because it’s clear he absolutely loves it. This isn’t a must see by any stretch, but if you want something fun and festive to do with your children I’d recommend it. I will definitely be returning to another Kid Carpet family show and armed with my new found knowledge and intrigue I’m also going to seek out some of his more grown up stuff.

Adventures in art and crafts